Teaching students to lead without saying a word

Spend a day in Jacob Harrison's conducting class to see what it takes to direct a musical performance. Video and images by Dave Olson

AMES, Iowa – Stepping onto the podium and raising the baton requires confidence. Whether it’s a high school pep band or a world-class orchestra, the conductor must command attention, setting the tone for the piece through gestures and cues that connect one measure to the next, without uttering a word.

To watch a seasoned conductor, it all looks so simple. But spend a morning in Jacob Harrison’s conducting class (just watch the above video) and you’ll quickly change your tune. Harrison, an associate professor of music and director of orchestral activities at Iowa State University, doesn’t expect perfection at this stage. But he does expect the two dozen or so music education and performance majors in the class to take risks.

“As a conductor, you can check the boxes and accomplish the tasks of moving your arms around in time, but if the music wasn’t interesting or it wasn’t fun to listen to, who cares? There’s the actual gestures and physical techniques that students need to master, but I also want to push them to take risks and become more mature musicians,” Harrison said.

Much like conducting a symphony, Harrison conducts his class with a certain energy. He creates an environment in which students are comfortable experimenting and making mistakes. Moving around the room, from one section of musicians to the next, Harrison wants to see exactly how students connect with the group. Are they making eye contact? Are their heads buried in the score? Do students default to what Harrison calls a security blanket or poker tell (chewing their lip or nodding their head) to disguise their nerves?

Harrison sees it all and makes sure each student conductor recognizes it too. Students are expected to be prepared to conduct a short exercise – typically eight measures of a song – every day in class. When they’re not conducting, students compose the ensemble by playing an instrument or singing.

It’s not unusual for Harrison to stop and start multiple times throughout each exercise, repeating the same four measures of “Danny Boy” to practice holding a note with one hand and using the other to move the song forward. Or at times, he’ll take hold and guide a student’s hand to help make choppy and rigid movements more fluid.

During a recent class, Harrison had one student stand against a wall – what the class jokingly referred to as “the wall of shame,” but Harrison described as “the wall of opportunity” – in an effort to correct the student’s tendency to bounce with the music. Harrison has even recommended that students practice conducting while lying on the floor, to understand how their body, facial expressions and other visual stimulants influence the ensemble’s performance.

“Ideally, all we have in a concert is nonverbal communication,” Harrison said. “If there’s too much movement and gestures and the musical ideas are unclear, the conductor starts to give mixed signals.”

From amateur to maestro 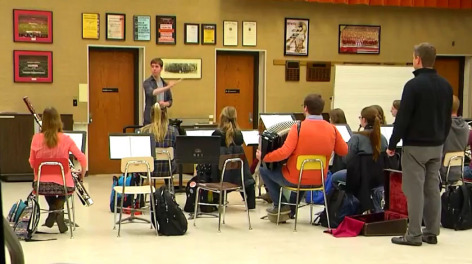 Jacob Harrison moves around the classroom to see how student conductors connect with the musicians.

A good conductor masters the different techniques, but greatness comes with “an intense amount of musicality inside” that is transferred to the ensemble, Harrison said. The conductor has tremendous freedom in the interpretation of each piece. From the speed to the emphasis of certain notes, Harrison says the conductor can change the personality and character of the music. While it’s a skill that students can develop with time and practice, it also requires something more innate.

The violin was just the beginning. Harrison added piano lessons five years later, and first picked up the trombone, which he considers his primary instrument, in middle school. But his desire to conduct was sparked at age 12, by the Arkansas Symphony Orchestra. Harrison remembers being blown away by the performance of Beethoven’s 9th Symphony – the first symphony work to combine orchestra and chorus. The conductor, David Itkin, was so charismatic that Harrison went home and tried to copy every move with a chopstick.

“The music was amazing and overwhelming, but the amount of energy that the conductor had and transmitted through the performance was great. He looked like he was having the most fun of anyone on stage,” Harrison said.

As director of the Iowa State Symphony and Chamber Orchestras, Harrison tries to transmit a similar energy during performances, but says his primary responsibility is serving the needs of the student musicians. Learning about a variety of music from different regions, eras and composers is equally as important as attention to proper rhythm, style and notes.

Harrison is also a guest conductor for professional orchestras, such as Ballet Arizona, the Phoenix Symphony and the Chattanooga Symphony, as well as student ensembles and honor orchestras. Each group – he’ll guest conduct six to 12 performances every year – challenges Harrison in a way that influences his work here at Iowa State.

“After working with younger groups, I find that I always come back more focused on teaching methods with the goal of improving fundamental musicianship skill sets,” Harrison said. “With professional musicians, I always stress a higher level of expectation in the quality of the sound and intonation to the ISU Orchestras.”

Whether it’s directing a high school pep band or a world-class orchestra, it's up to the conductor to lead and set the tone for a piece, all without uttering a word. There are proper gestures and cues to master, but Jacob Harrison doesn't want his students to get so caught up in technique that they forget to take risks with the music.

“As a conductor, you can check the boxes and accomplish the tasks of moving your arms around in time, but if the music wasn’t interesting or it wasn’t fun to listen to, who cares?"