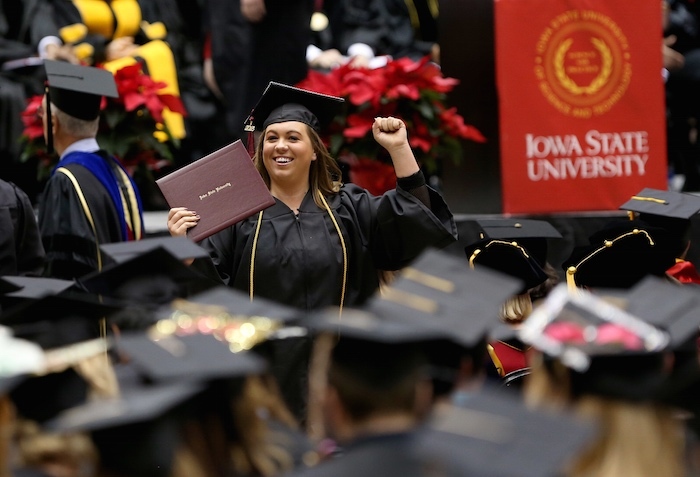 AMES, Iowa — An estimated 2,136 students are completing their Iowa State University degrees this month — the most ever for a fall commencement at the university. Many will participate in the university's single commencement ceremony on Saturday, Dec. 17. Bachelor's, master's and doctoral degree recipients all will be honored at 1:30 p.m. at Hilton Coliseum. Tickets are not required. Doors open two hours in advance.

The December class includes an anticipated 1,759 bachelor's, 257 master's and 120 doctoral students. This is the first time that the number of mid-year graduates is expected to exceed 2,000.

Iowa State students who completed their degrees during the summer term have the option of participating in either the May or December ceremony, and 80 of those students will join the December graduates on Saturday.

Prior to being elected to the U.S. Senate, Ernst served in the Iowa Senate (2011-14), representing District 12, a six-county region in the southwest corner of the state. She served as Montgomery County auditor from 2005 to 2011, also an elected position.

Her bachelor's degree from Iowa State is in psychology. Ernst also earned a master's in public administration from Columbus State University, Georgia.

As an undergraduate, she was part of Iowa State's ROTC program and, after graduating in 1992, she joined the U.S. Army Reserves. In 2003, Ernst served as commander of a transportation company of 150 Iowa National Guardsmen in Kuwait and Iraq during Operation Iraqi Freedom. In 2015, completing 23 years of military service, she retired as a lieutenant colonel in the Iowa Army National Guard.

Final exams conclude by noon on Friday, and colleges will honor their graduating students during college or departmental events Friday afternoon and evening and Saturday morning. Traditional aspects of commencement — such as wearing caps and gowns or conferring diplomas — will occur at the all-university ceremony, as first announced last spring. Details about the college receptions and convocations are online.

A live Twitter feed will take place before and after the commencement ceremony. Tweets including #cyclONEgrad may appear on the big screen at Hilton. A tagboard has also been set up.

An estimated 2,136 students are completing their Iowa State degrees this month — the most ever for a fall commencement at the university. Many will participate in the single commencement ceremony on Saturday, Dec. 17. Bachelor's, master's and doctoral degree recipients will be honored at 1:30 p.m. at Hilton Coliseum. Alumna and first-term U.S. Senator Joni Ernst of Red Oak will address the graduates. 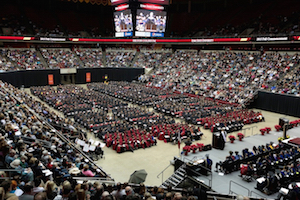