AMES, Iowa -- Over the past three decades, public support for same-sex marriage has risen from slightly more than 10 percent to a majority of the population. During a lecture at Iowa State University, co-authors of a new book will discuss how people's attitudes toward some controversial issues can change.

Melissa Michelson and Brian Harrison will present "How to Change Attitudes toward LGBT Rights" at 7 p.m. Wednesday, March 22, in the Memorial Union Sun Room. Their talk is free and open to the public.

Michelson and Harrison are co-authors of "Listen, We Need to Talk: How to Change Attitudes toward LGBT Rights," which explores how identity and communication affect attitudes about LGBT policies like marriage equality, employment non-discrimination legislation and transgender rights. The book presents their new theory about the process, called theory of dissonant identity priming. Conducting randomized experiments nationwide — in partnership with equality organizations — Michelson and Harrison found that people are often willing to change their attitudes about LGBT rights when they learn that others with whom they share an identity (for example, as sports fans or members of a religious group) are supporters of those rights.

Their presentation is co-sponsored by the political science department and the Committee on Lectures, which is funded by Student Government. 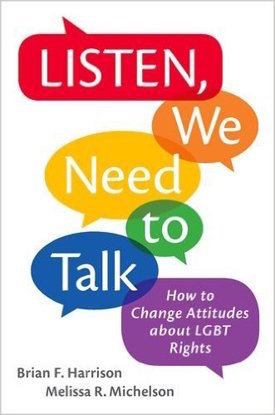 "How to Change Attitudes toward LGBT Rights"