Iowa State professor: Technology is great, but are we prepared for the consequences? 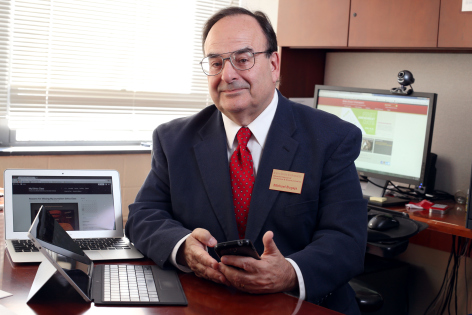 Michael Bugeja, professor and director of ISU's Greenlee School of Journalism and Communication, explores what might happen if we allow machines to dictate our lives. He says we need to educate ourselves on media literacy and the way in which we use technology -- asserting ourselves over the technology. Photo by Christopher Gannon.

AMES, Iowa – Most Americans have some form of digital technology, whether it is a smartphone, tablet or laptop, within their reach 24-7.

Our dependence on these gadgets has dramatically changed how we communicate and interact, and is slowly eroding some of our core principles, said Michael Bugeja, professor and director of the Greenlee School of Journalism and Communication at Iowa State University. Bugeja is not advocating against technology – in fact, he relies on it for his work and personal life – but he says we need to recognize the possible ramifications before it is too late.

In his forthcoming book, “Interpersonal Divide in the Age of the Machine,” Bugeja explores what might happen if we allow machines to dictate our life. Those machines range from smartphones to robotics to virtual reality. Bugeja theorizes that because of our reliance on machines, we will start to develop the universal principles of technology, such as urgency, a need for constant updates and a loss of privacy.

“We are losing empathy, compassion, truth-telling, fairness and responsibility and replacing them with all these machine values,” Bugeja said. “If we embed ourselves in technology, what happens to those universal principles that have stopped wars and elevated human consciousness and conscience above more primitive times in history?”

Need for media and technology literacy

Bugeja warns of the dangers associated with adopting these values. The proliferation of fake news is just one example of how this shift is already influencing our culture. Technology provides a continuous connection to our social media feeds, which has become a popular source for news for many Americans. However, social media tends to cultivate news stories that reflect our individual beliefs and values – not a broad spectrum of viewpoints – and is an easy way for fake news stories to spread, Bugeja said.

“The business of journalism is already feeling the effect of living in a world of correlation without causation,” he said. “We understand what happened and how it happened, but we don’t understand why it happened.”

That’s why Bugeja wants colleges and universities to require students take media and technology literacy courses. He says it is important that students know where to go to find credible news stories, and open their minds to information from a variety of sources, not just those that confirm what they already think or believe.

“We need these courses so that people know where to go for facts and how to deal with technology. If you do not assert yourself over technology, it will assert itself over you and you will be doing what the machine asks you, rather than you telling the machine what to do,” Bugeja said.

There is no easy short-term fix for the future, Bugeja said, which is why we need to temper our use. He says the long-term solution is through education.

Machines are not human

It is not just the philosophical and intellectual consequences that have Bugeja concerned, but also the impact of technology on business, behavior and everyday activities. Business and industry increasingly rely on machines or robots to do the jobs of humans. Bugeja says this shift can improve efficiency, safety and the company’s bottom line, but he questions what will happen to those individuals who lose their jobs to machines.

Working at a university, Bugeja has witnessed how machines have altered behavior in the classroom, dining hall or when walking across campus. Technology is a distraction that keeps students from focusing on their studies and limits interpersonal interactions, he said. In much the same way, the temptation of responding to an alert from social media or notification of a text message while driving has increased safety concerns.

“We introduce new gadgets by saying they will make our lives better, which is true, but there are also dangers,” Bugeja said.

The purpose of his latest book is to raise awareness about the dangers of living in a world dominated by machines. He challenges readers, just as he does with students in his class, to balance their use of technology and not feel pressured to respond immediately to an email or text message. The book, published by Oxford University Press, will be available in July.

Dependence on technology has dramatically changed how we communicate and interact, and is slowly eroding some of our core principles, said Michael Bugeja, professor and director of the Greenlee School of Journalism and Communication at Iowa State University. In his new book, Bugeja looks at its impact on everything from fake news to texting while driving.

“We are losing empathy, compassion, truth-telling, fairness and responsibility and replacing them with all these machine values. If we embed ourselves in technology, what happens to those universal principles that have stopped wars and elevated human consciousness and conscience above more primitive times in history?”

Michael Bugeja, professor and director of the Greenlee School of Journalism and Communication 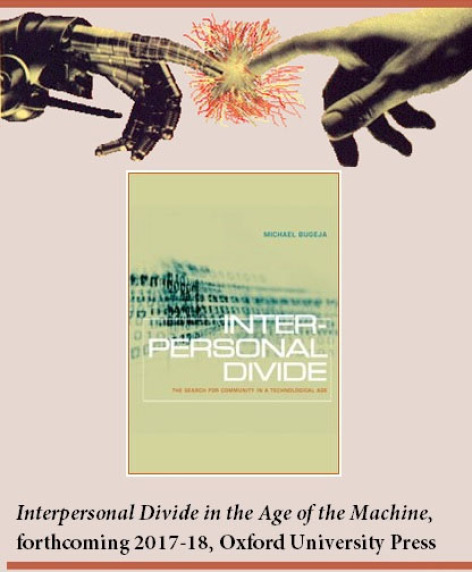