AMES, Iowa –They buzz. They bite. And they can transmit serious illnesses in the most severe cases.

Ryan Smith, an assistant professor of entomology at Iowa State University is encouraging Iowans to take precautions this summer when spending time outdoors in areas commonly populated by mosquitoes and ticks, which can transmit West Nile virus and other diseases that can have serious or potentially fatal outcomes.

Smith advised Iowans to wear insect repellent and appropriate clothing when outdoors. Additionally, he urged homeowners to rid their yards of standing water, a prime location for Iowa’s most plentiful nuisance mosquitoes to lay eggs.

Smith said tick populations likely will remain near peak levels through the rest of June. While Lyme disease remains the most prevalent in the state, there is also the potential threat of Powasson virus, which is similarly transmitted by deer ticks and is potentially fatal in humans. No cases of the virus have ever been detected in Iowa, but cases have appeared in Wisconsin and Minnesota.

When visiting wilderness areas for activities such as camping, hiking or fishing, Smith recommended regular checks of any exposed skin for ticks followed by a thorough search after returning home.

If you find a tick attached to your body, Smith said using tweezers improves the odds of complete removal. He said maneuvering the tweezers as close to the head of the tick as possible minimizes the chances of leaving behind parts of the tick’s mouth that puncture the skin.

Smith said anyone with plans to travel abroad this summer also should stay aware of insect-borne diseases. Infected mosquitoes in parts of South America and Africa, for instance, may transmit yellow fever, which can lead to severe liver disease. World health experts are monitoring an outbreak of yellow fever in Brazil, and Smith said travelers could bring the disease into the United States where native mosquitoes may become infected. Chikungunya virus, another disease transmitted by mosquitoes, raises similar concerns, Smith said.

“If you’re going to travel internationally, it’s just a good idea to know ahead of time what sort of infectious diseases are out there and what sort of precautions you can take,” he said.

For the second year in a row, the ISU Medical Entomology Laboratory has stepped up its efforts to trap the two mosquito species associated with the transmission of Zika virus, which can cause severe birth defects in newborns. The laboratory has expanded its trapping efforts from 15 counties in 2016 to 26 counties this summer. Smith said the laboratory placed many of its trapping sites along the southern and eastern borders of the state, where these species could be introduced.

Last year’s surveillance found no specimens of Aedes albopictus or Aedes aegypti, the mosquito species known to transmit the disease, in Iowa. But Smith said there’s nothing stopping the mosquitoes from crossing into Iowa from Illinois and Missouri, where Aedes albopictus has been confirmed.

“There are several variables that impact the prevalence of West Nile in Iowa in a given year, some of which we’re only beginning to understand,” Smith said. “But you can count on Iowa having some West Nile-positive mosquitoes.”

Most Iowans can count on a few bug bites, too, but taking the proper precautions will help to keep them to a minimum, he said. 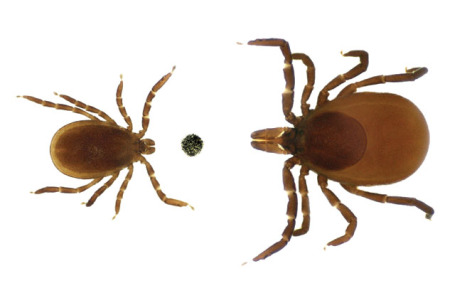 Deer ticks, pictured here, can transmit Lyme disease and Powasson virus, though Powasson has never been confirmed in Iowa. An ISU entomologist recommends the removal of ticks with tweezers if found on the skin. Image courtesy of ISU Extension and Outreach.

An Iowa State University entomologist is encouraging Iowans to take precautions to protect themselves this summer from mosquitoes and ticks, which may carry serious illnesses such as West Nile.

“There are several variables that impact the prevalence of West Nile in Iowa in a given year, some of which we’re only beginning to understand. But you can count on Iowa having some West Nile-positive mosquitoes.”