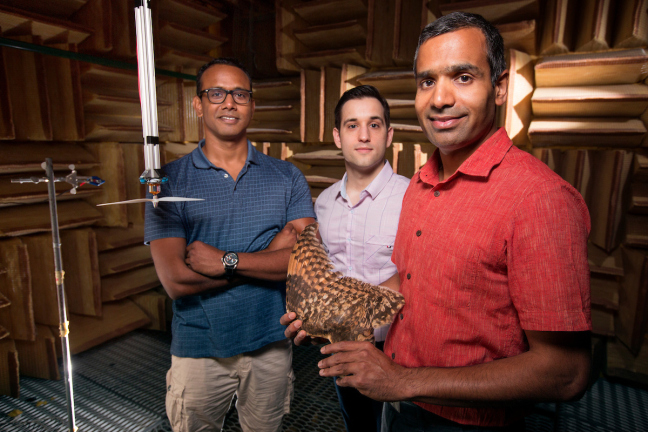 AMES, Iowa – Anupam Sharma pulled an accordion folder from the bookshelf above his Iowa State University desk. Inside was the carefully collected and preserved wing of a short-eared owl.

Here, he said, could be some clues for developing ultraquiet aircraft and wind turbines.

“The owl is almost completely silent in flight,” said Sharma, an Iowa State assistant professor of aerospace engineering and Walter W. Wilson Faculty Fellow who started working in aeroacoustics – the noise associated with air flow – during graduate school and a previous position at GE. “Owls are not only silent in gliding flight, but also in flapping flight, which is amazing.”

And then Sharma picked up the wing (a specimen collected by Iowa State avian ecologist Stephen Dinsmore) and pointed out the three-part “owl hush kit” that’s responsible for silent flight.

First, at the leading edge of the wing there are small, fine, comb-like structures. Second, all the feathers at the trailing edge of the wing end in a pliable and porous fringe. And third, there’s a downy coat on the flight feathers. (See Figure 1, below.) 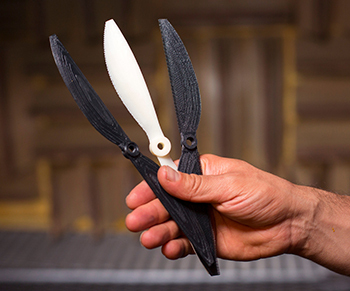 These are 3-D printed models of aircraft propeller blades

To learn exactly how that hush kit manipulates air flow, turbulence and pressure to produce silent flight, Sharma is scanning owl wing specimens, creating digital models and running multi-day simulations that use more than 16,000 processers provided by one of the country’s top-ranked supercomputing facilities at Argonne National Laboratory in Illinois. He and his colleagues hope their studies will produce practical ideas for making ultraquiet aircraft and wind turbines.

There have been previous studies of owl wings and silent flight. The U.S. military has also looked at owl flight for ideas for stealth aircraft.

But, Sharma said few have taken a high-powered computational approach to the studies.

“We can get into details that there is no way you can study with experiments,” Sharma said.

Sharma reported some of his numerical investigations earlier this year in Denver during the Aeroacoustics Meeting of the American Institute of Aeronautics and Astronautics. Sharma also described how the downy coat of owl wings inspired his collaborators at Virginia Tech to design model airfoils (the curved shape of an aircraft wing) with a regular series of small, thin “finlets” and canopies near the trailing edge of the blade and running parallel to the airflow. William Devenport, a Virginia Tech professor of aerospace and ocean engineering and director of the university’s Stability Wind Tunnel, led the experiments in Virginia.

Both research teams compared the performance of the owl-inspired airfoils to a standard, flat-surfaced airfoil.

Sharma said the computer simulations showed the owl-inspired airfoils substantially reduced the unsteady pressure on the back end of the blade surface. And, the researchers found that the sound radiated by the owl-inspired design was reduced by up to 5 decibels over a wide frequency range. This noise reduction was observed without sacrificing aerodynamic performance.

Sharma said the experiments performed by the Virginia Tech researchers agreed with the simulations. The researchers found the owl-inspired designs reduced noise and they also demonstrated that fence spacing on the airfoil is an important design parameter.

The National Science Foundation is supporting Sharma’s studies with a five-year, $500,000 CAREER grant, the foundation’s most prestigious award for early career faculty. The Iowa Space Grant Consortium has also supported the research with a $100,000 grant. And the National Science Foundation and the Argonne Leadership Computing Facility are supporting computer time for the studies.

In addition to Sharma, the grants are supporting the research of three Iowa State students in aerospace engineering: Andrew Bodling and Bharat Agrawal, doctoral students; and Vishal Vijay, a master’s student.

A 2016 paper by Sharma’s team and published in the International Journal of Aeroacoustics notes that tests of airfoils with a serrated leading edge inspired by owl wings found the serrations substantially reduced airfoil noise. The paper also established the physical mechanisms that caused the noise reduction. (See Figure 2, below.)

All of the simulations, tests and data applying the owl’s hush kit to airfoils and wind turbine blades doesn’t mean next-generation aircraft or wind turbines will look like owl wings.

“Our approach is bio-inspired as opposed to bio-mimicry,” Sharma said. “Our designs won’t look like owl wings. We’re studying the physical mechanisms behind the owl’s silent flight. Then we’re taking simplified geometries inspired by the owl wings and applying those to aircraft wings, rotor blades of jet engines and wind turbines.”

So far, the studies are telling him the owl has potential to help engineers develop ultraquiet flight and wind energy, although applications might start at smaller scales and low speeds, such as drones or unmanned aerial vehicles.

After that, Sharma wrote in a project summary, “The results of this research could have an impact on the design of silent air vehicles with application in national defense, in commerce and in transportation.” 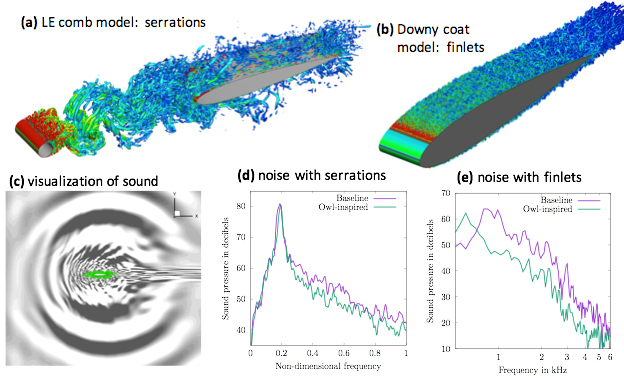 Figure 2: Results of numerical analysis: (a) investigation of a blade geometry with serrations inspired by the leading edge comb of the owl, (b) finlets inspired by the downy coat on flight feathers, (c) visualization of the radiated sound field for a model problem, and (d & e) typical noise reduction observed in the simulations.

“Our approach is bio-inspired as opposed to bio-mimicry. Our designs won’t look like owl wings. We’re studying the physical mechanisms behind the owl’s silent flight. Then we’re taking simplified geometries inspired by the owl wings and applying those to aircraft wings, rotor blades of jet engines and wind turbines.”