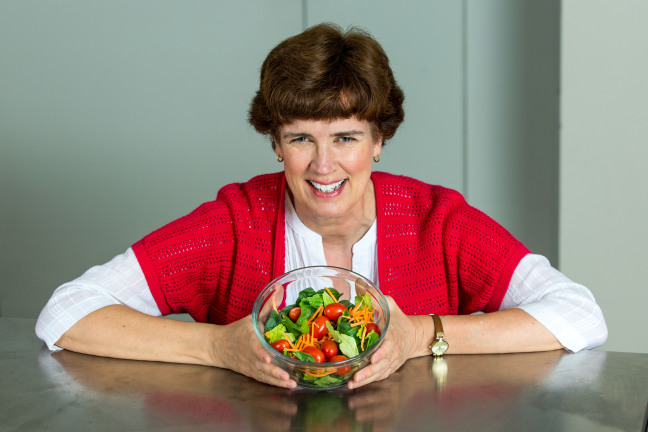 AMES, Iowa – The song says a spoonful of sugar helps the medicine go down, but an Iowa State University scientist has published new research suggesting a spoonful of oil makes vegetables more nutritious.

A new study led by Wendy White, an associate professor of food science and human nutrition, shows that eating salad with added fat in the form of soybean oil promotes the absorption of eight different micronutrients that promote human health. Conversely, eating the same salad without the added oil lessens the likelihood that the body will absorb the nutrients.

The study appeared recently in the peer-reviewed American Journal of Clinical Nutrition, and the results may ease the guilt of countless dieters who fret about adding dressing to their salads.

White said better absorption of the nutrients promotes a range of health benefits, including cancer prevention and eyesight preservation.

“The best way to explain it would be to say that adding twice the amount of salad dressing leads to twice the nutrient absorption,” White said.

That doesn’t give salad eaters license to drench their greens in dressing, she cautioned. But she said consumers should be perfectly comfortable with the U.S. dietary recommendation of about two tablespoons of oil per day.

The study included 12 college-age women who consumed salads with various levels of soybean oil, a common ingredient in commercial salad dressings. The subjects then had their blood tested to measure the absorption of nutrients. Women were chosen for the trial due to differences in the speed with which men and women metabolize the nutrients in question.

The results showed maximal nutrient absorption occurred at around 32 grams of oil, which was the highest amount studied, or a little more than two tablespoons. However, White said she found some variability among the subjects.

“For most people, the oil is going to benefit nutrient absorption,” she said. “The average trend, which was statistically significant, was for increased absorption.”

Unilever, a global food company, provided funding for the research. The company had no input in the publication of the study.

So a spoonful or two of salad dressing may indeed help you derive the optimal nutritional benefit from your veggies. The relationship between a spoonful of sugar and the medicine going down, however, remains outside the scope of White’s research.

Some dressing with your greens may help you absorb more nutrients, according to a study from an Iowa State University scientist. The research found enhanced absorption of multiple fat-soluble vitamins in addition to beta-carotene and three other carotenoids. The study appeared recently in the peer-reviewed American Journal of Clinical Nutrition, and the results may ease the guilt of countless dieters who fret about adding dressing to their salads.

“For most people, the oil is going to benefit nutrient absorption. The average trend, which was statistically significant, was for increased absorption.”