AMES, Iowa – Excess nitrogen gives an advantage to early season plants in Midwestern prairies, leading to further changes in prairie ecosystems, according to a recently published study from an Iowa State University scientist.

The study shows how excess nutrients from fertilizers that find their way onto prairies tend to alter the composition of those ecosystems, a development that has implications for management practices and wildlife habitat. The nutrients in the fertilizers can end up on nearby prairies when washed away by rain or carried by the wind when fields are plowed.

The study, originally published in the peer-reviewed academic journal PLOS ONE, also appears in the Science Journal for Kids, a publication aimed at presenting younger audiences with scientific concepts.

Lori Biederman, adjunct assistant professor of ecology, evolution and organismal biology and lead author of the study, said the project drew on data gathered from 11 prairies throughout the Midwest. The study looked at nitrogen, phosphorous and potassium fertilizers and found that nitrogen added to tall-grass prairies gives an advantage to early-season flowering plants such as brome grass and violets.

The earlier-flowering plants then compete with plants that flower later in the year, such as asters and bluestems. The plants that flower in May and June, fertilized by the excess nutrients, take up more space, water and sunlight than they would under normal conditions, Biederman said. That makes it more difficult for late-season plants to grow.

“When we add fertilizer, we’re changing the composition of the prairie community to species that produce flowers earlier in the season,” Biederman said. “Nitrogen was the driver of the changes we saw.”

The changes in prairie composition could cause shifts in animal habitat, particularly for pollinating insects that depend on flowering plants, she said.

The study involved numerous plots of prairie plants to which researchers added various levels of fertilizer. The researchers then assessed the abundance of each plant species growing in each plot. The research drew on data from a global web of scientists who monitor and share ecological conditions. 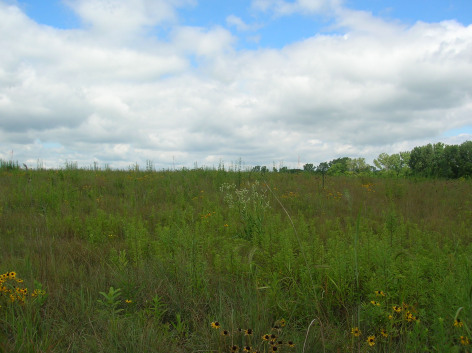 Excess nitrogen in tallgrass prairies, like the one pictures here, gives an advantage to plants that flower early in the growing season, which then crowd out plants that flower later in the year, according to new ISU research. Photo courtesy of Lori Biederman. Larger image.

Excess nitrogen can change the composition of tallgrass prairies, granting an advantage to plants that flower earlier in the growing season over plants that flower later, according to new research from an Iowa State University scientist. The findings have implications for wildlife and pollinating insects that use prairie plants for habitat.

“When we add fertilizer, we’re changing the composition of the prairie community to species that produce flowers earlier in the season. Nitrogen was the driver of the changes we saw.”