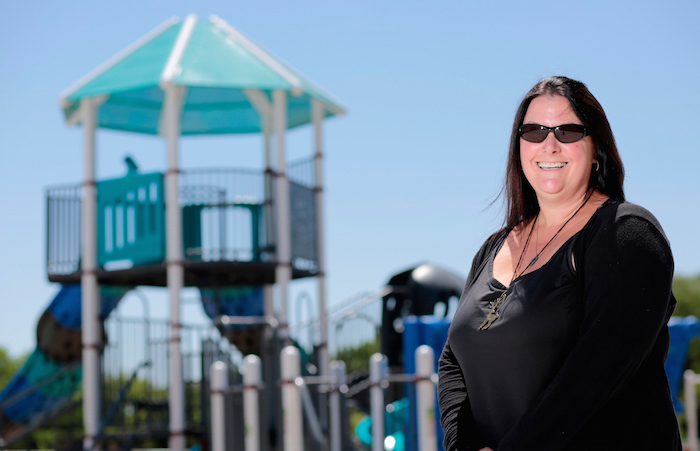 AMES, Iowa -- Since the 1960s, there has been a trend in the United States to eliminate the risk from play environments. Teeter-totters, merry-go-rounds and monkey bars were deemed too dangerous. Even the game "Red Rover" was taboo because of its physical contact and impact.

But danger is not the same as risk. And eliminating all risk within play eliminates creativity, challenge and discovery, says Bambi Yost, associate professor of landscape architecture at Iowa State University. She is one of an increasing number of researchers who agree that safe, risk-taking opportunities on the playground can benefit children's health and learning.

Yost is co-author of "Making Room for Risk in Play Environments and Playground Standards," published in the journal Landscape Research Record No. 5. The other authors are Daniel Jost and Ghiasi Ghorveh Mohsen, North Carolina State University; and Shannon Miko Mikus, University of Georgia. In September, Yost and Jost presented the research at the 20th Triennial International Play Association Conference in Calgary, Canada.

They are calling for a more holistic approach to the design and regulation of play environments and playground equipment.

"We need a new way of thinking about beneficial risks within play environments that minimizes injury but allows kids to challenge themselves and discover their own abilities and limits," Yost said.

Risk in play can benefit children's physical, social and cognitive health for life. For example, children who are allowed to "run full throttle" tend to be more physically active and have lower obesity rates.

And risk-taking also may be associated with improvements in learning gross motor skills that could reduce the potential for future injury. When children learn balance and proprioception (an awareness of one's body moving through physical space) at an early age, they tend to be more secure on their feet later in life.

"There's a lot of benefit in trying something you've never done. It will fire new neurons and help instill a greater sense of self-assurance. If you fail once, you might succeed the next time," she said.

"Being able to move bars higher or farther apart empowers kids to challenge themselves gradually and gain confidence," Yost said. "If they don't test their abilities and limits sooner, they will when they're older and the risk of injury is greater.”

She also cited a recently published study by other researchers showing play that is more physically challenging and cooperative can reduce bullying and aggressive behavior on the playground. And studies have found risky play in supportive environments commonly led to more physical activity and less sedentary behavior. It also encouraged more playtime, social interactions, creativity and flexibility.

Play equipment designers and manufacturers are driven by the potential for injury and lawsuits. Since the early 1970s, the U.S. Consumer Product Safety Commission (CPSC) has used a national database, called the National Emergency Injury Surveillance System, to collect injury data from a sample of the nation's hospitals. It shows the type of products associated with an injury on a playground, and is used to estimate the number of injuries associated with different types of products nationally. Information from the database is used in manufacturers’ national standards for play equipment

"However, the database is not specific enough to draw any conclusions about what might have led to the accident and where design intervention could be useful," Yost said.

Because the database categorizes playground equipment into a few broad groups, she said it is difficult to establish what sort of behavior on a swing or slide led to an injury, for example. And it is impossible to establish the relationship between any specific play equipment and its surroundings.

"The number one cause of injury is falls," Yost said. "If a child falls off a swing or slide onto the surface below, the swing or slide is associated with the injury in the database. Yet, surfacing affects whether the child sustains an injury. The impact causes the injury, so surfaces play a big role in injury."

For example, a loose-surface, engineered, wood-fiber surface (which looks like mulch) needs to be regularly raked, fluffed and replenished to remain soft, she said. Otherwise, it becomes a hard surface.

Other variables in playground injury include whether or not the child injured was using age-appropriate equipment, or using the equipment appropriately. Yost said she has seen bored children take their bikes to the top of a slide and attempt to ride down.

"Once manufacturers agreed that they're going to produce play equipment in such a way that no one is ever going to get injured or sued, then they've essentially agreed to be the entity that is liable and more likely to get sued," she said.

"As a result, they set up safety requirements and evaluations, but they designed play equipment that was static and dull. Kids didn't necessarily want to be on it," Yost said.

Yost and her co-authors propose a re-evaluation of how play-equipment injury is measured. It’s currently based on the cost of injuries and lawsuits, without including benefits of risk-taking opportunities.

“The benefit might be that, down the road, you end up with adults with better balance skills who fall less often. Or it might be that we are reducing obesity by allowing more physically active play,” Yost said. "Those benefits need to be included in the equation."

Yost said the holistic perspective looks at the benefit — the best-case scenario for instilling youth with a sense of empowerment over their bodies and environment. They understand their own limits and how to challenge themselves, and take incremental steps to improve at something.

In the United Kingdom and Canada, parents are pushing back. Manufacturers are trying to be more holistic by looking at the benefits for children’s cognitive, social, health and physical abilities associated with taking more risk.

“It doesn’t mean it’s dangerous, but, like children’s sports, there is some inherent risk,” Yost said.

And adventure parks and playgrounds are beginning to pop up in the U.S. and Canada. Such facilities create spaces where kids can dig in the dirt and get muddy, or play with tools, under the guidance of a play advocate.

“We need a shift. People need to understand that danger is different than risk,” Yost said.

Since the 1960s, there has been a trend in the United States to eliminate the risk from play environments. Teeter-totters, merry-go-rounds and monkey bars were deemed too dangerous. But danger is not the same as risk. And eliminating all risk within play eliminates creativity, challenge and discovery, says Bambi Yost, associate professor of landscape architecture. She is one of an increasing number of researchers who agree that safe, risk-taking opportunities on the playground can benefit children's health and learning. 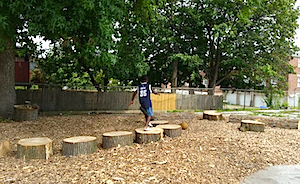 "We need a new way of thinking about beneficial risks within play environments that minimizes injury but allows kids to challenge themselves and discover their own abilities and limits."