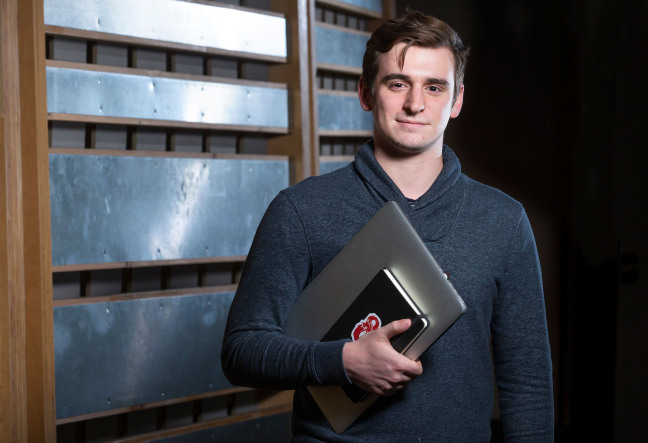 Kevin Burgoni is graduating after a health scare forced him to put his education on hold. (Larger image) Photo by Christopher Gannon

AMES, Iowa – Kevin Burgoni was on track to graduate from Iowa State University in four years, until his world literally started spinning out of control.

“I could not stand up straight,” he said. “I could barely even lie down without wanting to roll around because I was so dizzy.”

The spinning started without warning one night as Burgoni – then a junior – was getting ready for bed. He stayed there for three days. His condition would get worse before getting better, forcing the industrial design major to return home to Naperville, Illinois, and put his college career on hold.

“It was like getting hit by a truck. All of this happened so suddenly.”

It would seem Burgoni was destined for a career in industrial design. Growing up, he loved using his hands to create – often starting with a sketch in his notepad and then molding the design with clay or building it with Legos. Burgoni credits his parents with fostering his curiosity and creativity.

To think that he might make his passion a career never occurred to Burgoni until a high school counselor recommended he check out Iowa State’s industrial design program. He didn’t hesitate. A tour of the ISU campus and a conversation with David Ringholz, associate professor and chair of industrial design, made such an impression that Burgoni took just one college visit.

Burgoni says he never wavered in his decision. His experience as a college student – collaborating with professors and companies in design labs – only confirmed Iowa State was the right fit and he was on the right career path. By the spring semester of his junior year, Burgoni was eager to start working with his classmates on the design for an electric scooter. He never got the chance.

Delayed, but not derailed

After days in bed with severe vertigo, Burgoni lost muscle control on the right side of his face. He called his parents, who immediately drove to Ames and took him back home to see their family doctor. An MRI identified the problem – an acoustic neuroma, a noncancerous tumor that grows on the main nerve leading from the inner ear to the brain.

Burgoni says after a series of tests doctors determined a virus likely caused his facial paralysis and accelerated the growth of the tumor, which explained the sudden and severe symptoms. Surgery was his only option. There was a chance he’d lose hearing in his right ear, but if the tumor continued to grow his symptoms would only get worse, Burgoni said.

Doctors successfully removed the tumor, and while Burgoni is now deaf in his right ear, he is thankful this health scare only delayed his plans for graduation by one semester. In fact, Burgoni, who describes himself as “hopelessly optimistic,” sees a silver lining.

After returning to campus, Burgoni joined a design team working on a line of luggage that will soon be in production. “As a designer, it’s really exciting to see your work come to life,” he said. The timing also helped him land an internship with Vermeer Corp. in Pella, where he’ll start working in January.

“Looking back, it was almost a blessing in disguise. If I hadn’t delayed I wouldn’t have the opportunity to work with Vermeer,” Burgoni said. “I’ve enjoyed my adventure at Iowa State and then some, but my major has made me so hungry to jump out into the real world that I feel it’s time. I want something else now and I’m ready for the next step.”

Kevin Burgoni was on track to graduate from Iowa State University in four years, until a sudden and scary health situation changed his timeline.

“It was like getting hit by a truck. All of this happened so suddenly.”