This story is part of a series about CYstarters, Iowa State’s startup accelerator that helps students become entrepreneurs. 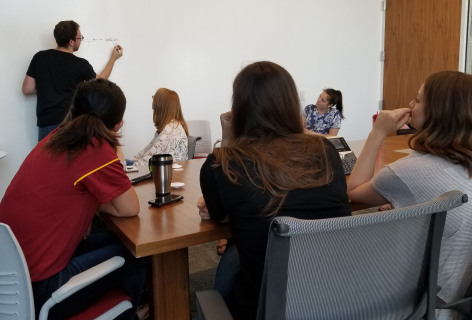 CYstarters participant Steve Abramsky leads a focus group on a new razor he is designing.

AMES, Iowa – Steve Abramsky started the conversation with a generic question about shaving trends. As the only man in a room of women, he was nervous and simply wanted to break the ice.

Much to his relief, it worked. The conversation quickly evolved from shaving trends to razor preferences, cost and shared experiences about hard-to-shave places, cuts and the dreaded bikini area. It was exactly what the Iowa State University student and entrepreneur hoped to glean from the focus group.

“Everyone just bounced off one another and there were so many different opinions and experiences,” Abramsky said. “That collective environment where everyone had a shared experience, but different perspectives, was beneficial.”

The feedback will help Abramsky – one of the startups in this summer’s CYstarters cohort – fine-tune his prototype for a new women’s razor that uses a 360-degree architecture of circular blades he designed. The razor concept grew out of a class project that required students to improve a product they use daily.

Abramsky says he set out to redesign the trimmer he uses to maintain his close-shaven beard. But as he worked on the project, many of his female friends, even his mom, told him to design a razor for women. Once he started looking at the market, he says it was apparent he needed to change course. The focus group only confirmed that decision.

“Getting that information and seeing it back up other consumer research is reassuring that I’m on the right path and that this could potentially be a successful product,” he said.

Never having led a focus group before, Abramsky did his research and sought the advice of Joe Benesh, who conducted a workshop on the topic for CYstarters. Benesh, an Iowa State alum and president of The Ingenuity Company, conducts focus groups and works with various organizations on strategic planning and development. His CYstarters workshop is one in a series of educational sessions led by nearly two dozen professionals and community leaders during the 10-week summer accelerator.

Benesh says he wants to help the young entrepreneurs avoid some of the pitfalls he has experienced. He says a mistake many organizations, not just startups, make is failing to assess a product or service to find ways to improve.

“There’s a tendency for organizations to silo around what they think is a good idea and move forward without the benefit of outside feedback,” Benesh said. “Organizations need to test ideas along the way to avoid making bad assumptions because they’re insulated from outside assessment.”

With workshop topics ranging from focus groups to patent law to digital marketing, startups learn the ins and outs of starting a business and have access to resources that might otherwise be out of reach, if not for the CYstarters program. Abramsky says he is not wasting the opportunity and is taking full advantage of the tools at his disposal as well as the guidance from the Pappajohn Center for Entrepreneurship staff who lead the CYstarters program.

“The staff is so passionate about your success and in some ways even your failures,” Abramsky said. “They really care about my product and making sure I have what I need to move it forward.”

Abramsky is eager to see the progress he will make by the end of the 10-week program. Ideally, startups will be ready to launch by the end of summer, but it is common for some to transition to programs, such as the ISU Startup Factory, and continue working toward that goal.

To help startups move from concept to launch, CYstarters provides educational workshops on topics ranging from focus groups to patent law to digital marketing. Entrepreneurs learn the ins and outs of starting a business and have access to resources that might otherwise be out of reach.

“Getting that information and seeing it back up other consumer research is reassuring that I’m on the right path and that this could potentially be a successful product.”

CYstarters is a 10-week summer accelerator for Iowa State University students and recent graduates. The 15 startups selected for this year’s cohort are working on everything from a pet safety restraint system to human nutritional supplements. Individual projects receive $6,500 in financial support. Team projects receive $13,000.

From 10-minute pitches to a 10-week intensive: Meet three startups accepted to CYstarters