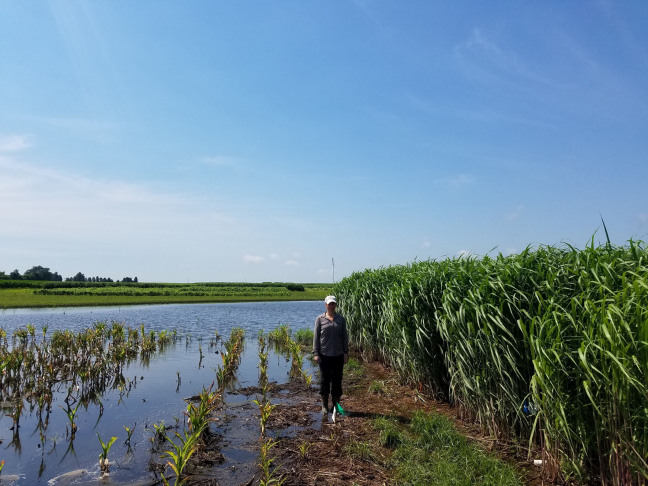 Emily Heaton, associate professor of agronomy and a member of the ISU research team, stands in a “pothole,” or a low-lying area of an agricultural field that tends to flood. Miscanthus, a tall perennial grass, grows on the right side of the photo. Photo by Jaejin Lee. Larger image.

AMES, Iowa – Low-lying fields often flood after heavy rains, sometimes requiring those acres to be replanted or even leading to total crop losses. The problem occurs often enough that some Iowa State University scientists wonder if planting grasses in those flood-susceptible sections might make more sense than corn and soybeans.

The ISU researchers recently received a $475,000 grant from the U.S. Department of Agriculture’s National Institute of Food and Agriculture to find out how well miscanthus, a towering perennial grass native to Asia, grows in the “potholes” of farm fields that tend to flood during periods of intense rainfall. If the researchers find the miscanthus stands up well in wet conditions, it could point toward alternative uses of flood-prone farmland that lead to environmental and economic benefits for farmers.

“Many people in this part of the corn belt are familiar with ponding areas in fields,” said Andy VanLoocke, an assistant professor of agronomy and primary investigator on the grant. “We call them potholes. Our team has been working on coming up with other ways to manage those specific land features that might allow for more profitable and sustainable outcomes.”

The concept depends on the ability of miscanthus to grow well in the potholes. Sometimes flooding too late in the growing season means corn or soybeans in those areas aren’t replanted at all, VanLoocke said, leading to a total loss for farmers on those acres. Converting those acres to a more resilient crop might save money in the long term.

The scientists are examining around 320 acres of land on two ISU research farms. They’ve identified 15 “potholes” where water commonly pools and for which the researchers already have yield data from previous years. The researchers will plant micanthus in some of those sections while leaving row crops in others. They’ll then compare how the miscanthus and crops perform.

The experiment will track three variables associated with each pothole: yield, water quality and greenhouse gas emissions. VanLoocke said previous research has shown those potholes to be hotspots for the loss of nutrients. Nitrogen can leach from the potholes into nearby waterways, and the potholes also emit nitrous oxide, a greenhouse gas. Planting miscanthus puts roots in the soil that may hold those nutrients in place more effectively.

VanLoocke said preliminary data suggest miscanthus may perform well in areas that flood periodically. He said that may be due to the plant’s rhizomes, or a mass of subterranean roots that grow horizontally. And harvesting the miscanthus could provide a rich source of biomass to be used as fuel in power plants or for other applications.

VanLoocke described the project as “high-risk, high-reward,” because there are plenty of unknowns left to explore. The researchers don’t know that the miscanthus will perform well in the potholes, despite some laboratory and anecdotal evidence suggesting it will. And even if the miscanthus grows in the potholes, additional economic analyses will be required to determine how viable the strategy might be for farmers.

Other researchers on the project include Amy Kaleita, professor of agricultural and biosystems engineering; and Emily Heaton, associate professor of agronomy. The project builds on preliminary data gathered by Steven Hall, assistant professor of ecology, evolution and organismal biology.

Iowa State University researchers have received a grant to study how well the perennial grass miscanthus performs in low-lying areas of agricultural fields that are prone to flooding. The research has the potential to identify more efficient uses of such land while also providing environmental benefits.

“Many people in this part of the corn belt are familiar with ponding areas in fields. We call them potholes. Our team has been working on coming up with other ways to manage those specific land features that might allow for more profitable and sustainable outcomes.”