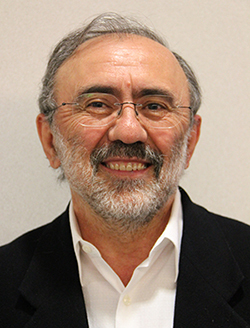 Soukoulis was chosen for induction having “demonstrated a highly prolific spirit of innovation in creating or facilitating outstanding inventions that have made a tangible impact on the quality of life, economic development, and welfare of society.”

“It is an honor to be named a fellow of the National Academy of Inventors,” said Soukoulis, “and be recognized for your life’s work.”

In addition to being an NAI Fellow, Soukoulis is also a fellow of the Optical Society of America, the American Association for the Advancement of Science and the American Physical Society. He has received the Descartes Prize for Research of Metamaterials, the Max Born Award, the Humboldt Research Award, the James C. McGroddy Prize for New Materials, the Alexander Von Humboldt Fellowship, the Rolf Landauer Medal and numerous other awards from Iowa State University and the Department of Energy. His research has been among the most-cited work for the past four years according to Clarivate Analytics.

The 2018 class of NAI Fellows will be inducted on April, 11, 2019, during the NAI Annual Meeting at Space Center Houston in Houston. Andrew H. Hirshfeld, U.S. Commissioner for Patents for the United States Patent and Trademark Office, will provide the keynote address for the ceremony. The complete list of NAI Fellows is available on the NAI website.

The National Academy of Inventors is a nonprofit member organization comprising U.S. and international universities, and governmental and nonprofit research institutes, with over 3,000 individual inventor members and fellows spanning more than 240 institutions. It was founded in 2010 to recognize and encourage inventors with patents issued from the U.S. Patent and Trademark Office, enhance the visibility of academic technology and innovation, encourage the disclosure of intellectual property, educate and mentor innovative students, and translate the inventions of its members to benefit society.

The National Academy of Inventors has named Costas Soukoulis of Iowa State University and the Ames Laboratory one of its fellows. He joins five other inventors affiliated with the university or the laboratory who have been named academy fellows.

“It is an honor to be named a fellow of the National Academy of Inventors and be recognized for your life’s work.”

Costas Soukoulis of Iowa State and the Ames Laboratory

About the Ames Laboratory

DOE’s Office of Science is the single largest supporter of basic research in the physical sciences in the United States, and is working to address some of the most pressing challenges of our time.