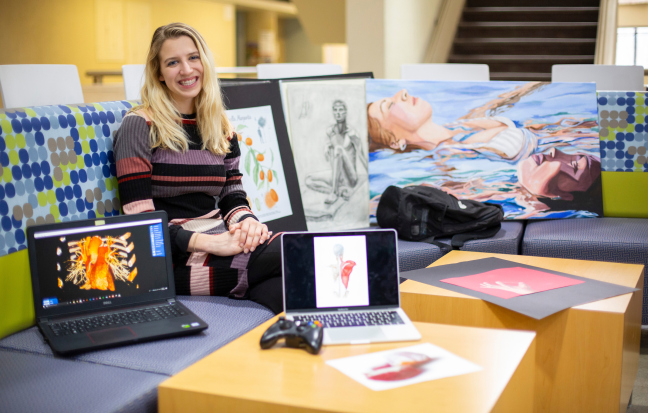 Olivia De Kok is graduating this weekend with a bachelor's degree in biological and pre-medical illustration. Photo by Christopher Gannon. Larger image.

This Saturday, De Kok graduates from Iowa State University with her bachelor’s degree in biological and pre-medical illustration. BPMI combines science and art into a unique program that is shared between the College of Design and the College of Liberal Arts and Sciences.

But when De Kok left her hometown of Sheldon for Iowa State, she didn’t know what she wanted to do. She enrolled open option, as do about 20 percent of ISU freshmen every year.

“I was just very confused about everything,” she said. “I’ve always wanted to do everything, so it’s hard for me to decide one thing to do. I was thinking philosophy or biology or pre-med, and I ended up taking philosophy and biology classes.”

The spring semester of freshman year arrived, and while De Kok enjoyed her biology classes, she knew something was missing. She headed to the Student Services Building and took a quiz that matched her interests with compatible majors. BPMI was in the top three.

She had never heard of scientific illustration before, but many students come to Iowa State specifically to major in BPMI, one of the longest-running programs of its kind in the nation. Fewer than 12 similar programs exist in the U.S. — and Iowa State’s is consistently recognized as one of the best. It’s competitive and the curriculum is rigorous, split between science lectures and labs in the mornings and design studios in the afternoons.

“I took some art classes in high school. I’ve just always loved art and done it myself,” De Kok said. “But it was really just me messing around. I didn’t have any formal training until I came here.

“If I wouldn’t have come here I would have never learned about BPMI or knew it existed. I just feel like it’s the perfect fit for me; I want to be a medical illustrator.”

You don’t necessarily need to be a born artist to major in BPMI, De Kok says. She shudders thinking of some of her first sketches, but her portfolio today shows incredible growth in her artistic skills and scientific accuracy over the past four years.

To finish her undergraduate career, De Kok interned at BodyViz in Clive, which was founded by James Oliver, the Larry and Pam Pithan Professor of Mechanical Engineering; and Eliot Winer, professor of mechanical engineering. BodyViz uses its interactive anatomy software to turn MRI and CT data into 3-D visualizations. De Kok works on the company’s content team, creating e-learning quizzes that are sold to undergraduate and graduate anatomy education departments.

She took her education a step further, becoming a mentor to open option freshmen in the Sky is the Limit learning community.

De Kok has mentored more than 25 students since 2015, including five this fall, each in the same unsure position she was in four years ago. They talk about how college is going, their interests, which majors align with those interests and how to overcome hurdles they may encounter throughout college — everything from career fairs to email etiquette.

“There were a lot of things I was so confused about coming into school, so it’s great to pass on the little bit of knowledge I’ve gained along the way and help them in any way I can,” she said.

“I’m definitely going to be sad graduating, but I’m also looking forward to what’s ahead,” she said.

When Olivia De Kok left her hometown of Sheldon for Iowa State University, she didn’t know what she wanted to do. She enjoyed her biology classes, but something was missing. That’s when she found biological and pre-medical illustration.

“If I wouldn’t have come here I would have never learned about BPMI or knew it existed. I just feel like it’s the perfect fit for me; I want to be a medical illustrator.”

The ceremony will be livestreamed. Go to www.graduation.iastate.edu for more information.