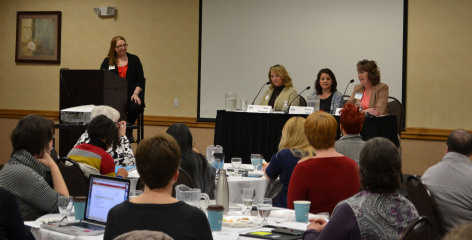 Kelly Winfrey leads a panel discussion as part of the 2017 Ready to Run program. (Larger image) Photo courtesy of the Catt Center

AMES, Iowa – The record number of women elected to political office in 2018 is not only changing the dynamics of state and federal governments, but Kelly Winfrey expects it also will have a ripple effect on future elections.

“Political science research has looked at the multiplier effect and when more women run and win, more women will run. I think the success we saw in the 2018 election is a good sign more women will want to run,” said Winfrey, an assistant professor at Iowa State University and organizer of Ready to Run® Iowa: Campaign Training for Women program.

Winfrey says women are often hesitant to run, which is why she encourages anyone considering political office to register for Ready to Run® Iowa. The nonpartisan campaign program is open to everyone, but designed to help women organize a campaign, develop a message and interact with voters. The training also is beneficial for women interested in serving on a board or commission, or who want to run or volunteer for a campaign.

Iowa State’s Carrie Chapman Catt Center for Women and Politics has offered the program every other year since 2007. The 2019 program consists of six interactive workshops presented on Feb. 15, March 29 and April 19. Each workshop is taught as an individual training session that can be attended separately or in conjunction with other workshops.

Registration is now open for the February session, which features workshops on Iowa politics and political parties as well as launching a campaign. Winfrey says in response to feedback organizers have added a session on the research and networking required to lay the groundwork before launching a campaign. Another new feature is a networking lunch session to give women the opportunity to share ideas and experiences. 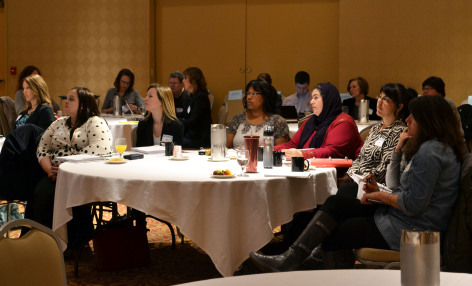 Monic Behnken (center) listens to a presentation at Ready to Run in 2017. (Larger image)

Monic Behnken attended Ready to Run® in 2017 before launching a campaign for the Ames School Board. Behnken is one of several women scheduled to talk at the February workshop about making the decision to run for office. Behnken, who was elected to the school board in 2017, credits the program for her success.

“Ready to Run gave me the education, skills and confidence I needed to run a successful citywide campaign,” Behnken said. “Anyone looking to run for elected office or support someone who is running would benefit from this training.”

A record number of women ran for office in last fall’s general election – of the 92 women in Iowa (13 were past Ready to Run® participants), 41 were elected. Winfrey says women made huge strides, but they are still underrepresented. She is optimistic women can build on this momentum. The training will help prepare them for what to expect on the campaign trail.

“Women are still novel. The fact that there are more women running helps, but we still don’t see as many women running as men, so that highlights gender immediately. As a result, women are often asked about different issues and have different experiences,” Winfrey said.

The March and April workshops will focus on launching a campaign, fundraising, website development, social media, crafting a stump speech and working with the media. Winfrey says all sessions are based in academic research on women and political campaigns. Information is presented by local, state and national political leaders and campaign strategists.

Participants can see a complete schedule and register for the Ready to Run® Iowa workshops by clicking here. Space is limited and registration is required. Registration for the March and April sessions will open a month in advance.

Kelly Winfrey expects the record number of women elected in 2018 to have a ripple effect on future elections. Because women are often hesitant to run, she encourages anyone considering political office to register for Ready to Run® Iowa.