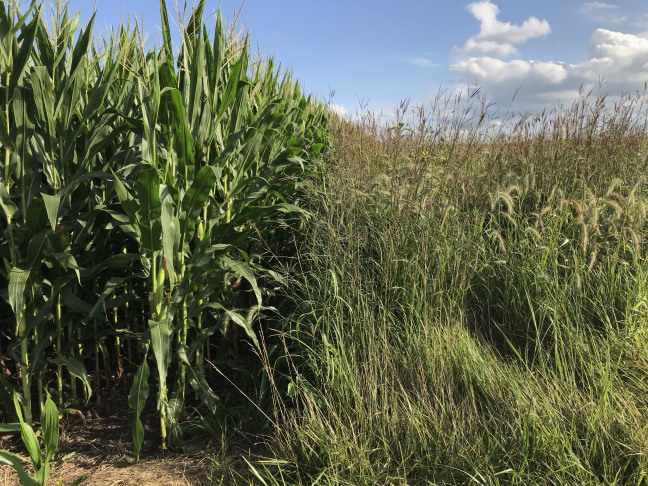 AMES, Iowa – The ability of cover crops to stimulate microbes deep in the soil of farm fields leads to significant gains in water quality but does not necessarily increase the capacity of soil to store carbon, according to a recently published study from Iowa State University scientists.

The study, published in the academic journal Global Change Biology Bioenergy, analyzed soil samples that had undergone a wide range of long-term treatments. Steven Hall, an assistant professor of ecology, evolution and organismal biology and corresponding author of the study, said the research delves deep below the surface to explore how cover crops and perennial prairie plants affect soil microbial activity.

The research found winter rye, a plant commonly used as a cover crop, provides a source of carbon that stimulates microbes as much as a meter under the surface of the soil. That stimulation increases the microbes’ demand for nutrients. The process of consuming soil nutrients keeps those nutrients from running into waterways, which is an important environmental benefit.

However, the microbes may digest much of the carbon provided by the cover crop, converting it into carbon dioxide, which is released to the atmosphere. This means that the cover-crop carbon is not necessarily stored, or sequestered, where it could help offset climate change.

The findings may surprise some who assume having more plants in the soil means increased carbon storage, Hall said.

The study analyzed 96 soil core samples taken from a 10-year field study. Some of the fields underwent continuous corn planting, some underwent corn-soybean rotation, some had cover crops following continuous corn and some had reconstructed prairies. The core samples allowed the researchers to figure out how deeply cover crops and perennial plants intensify microbial activity, and to see what carbon sources microbes were digesting.

An Iowa State University study delves deep below the surface to find how cover crops such as winter rye affect soil microbes a meter underground. The study found cover crops and perennials improve water quality but don’t necessarily lead to gains in carbon sequestration, a finding that could have implications for climate change.