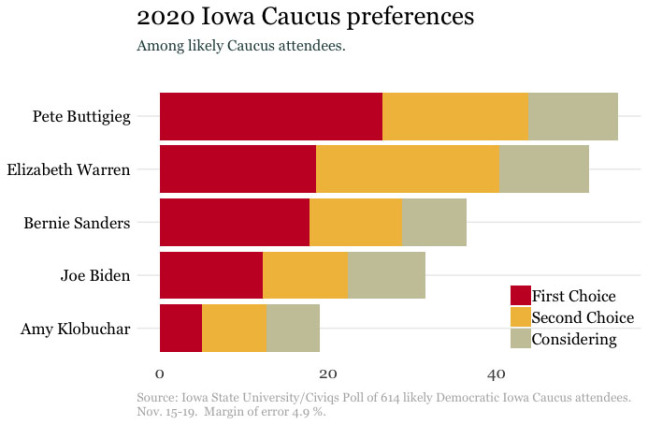 This graph illustrates voters first and second choice as well as other candidates they are considering. (Larger image) Graphic courtesy of Dave Peterson

AMES, Iowa – Support for Sen. Elizabeth Warren has dropped by nearly 10% over the past month, according to the latest Iowa State University/Civiqs poll of Democratic presidential candidates. At the same time, the percentage of likely Iowa caucus-goers who do not want Warren to get the nomination jumped by 5%.

This shift has helped propel Mayor Pete Buttigieg to the top of the poll, with 26% of those surveyed selecting Buttigieg as their top choice. Warren is in second with 19%. Support for Sen. Bernie Sanders (18%) and former Vice President Joe Biden (12%) did not change since the last poll in October. Dave Peterson, a professor and Whitaker Lindgren faculty fellow in political science, organizes the poll.

“Warren has seen heightened scrutiny this past month, while Buttigieg has received mostly positive attention,” Peterson said. “A little over 60% of the people who supported Warren in October still support her now, and those who switched went to Buttigieg.”

The online poll of 614 likely Democratic caucus-goers, conducted Nov. 15-19, asked voters to name their first and second choices, and also list candidates they do not want to get the nomination. Peterson says a majority of the respondents have been interviewed each month, which shows how voter preference is shifting and could continue to change leading up to the Iowa caucus.

“What this tells me, is that there is a segment of Iowans backing the candidate getting the most positive coverage,” Peterson said. “If we start seeing more scrutiny of Buttigieg, then his lead might prove to be temporary as well.”

Only 1% of those surveyed picked former New York City Mayor Michael Bloomberg as their first choice. Bloomberg had more voters say they do not want him to get the nomination than supporters. Some say they are considering former Massachusetts Gov. Deval Patrick, but very few named him as their first or second choice.

This graphic shows the candidates that voters do not want to win the nomination. (Larger image) Courtesy of Dave Peterson

The online survey was sent to selected members of the Civiqs research panel. Likely caucus attendees were identified as those who responded they would “definitely” or “probably” attend the Iowa Democratic Caucuses and identified as Democrats or independents. An oversample of Democrats and independents were selected to produce a larger number of likely caucus attendees.

Demographic data were collected in previous Civiqs surveys. The results for registered voters are weighted by age, race, gender, education, party and congressional district to be representative of registered voters in Iowa. The survey has a margin of error of plus or minus 4.9%. Results of the next poll are expected in mid-December.

The Iowa State University/Civiqs poll is funded by Iowa State’s Department of Political Science, Catt Center for Women and Politics, College of Liberal Arts and Sciences, Office of the Vice President for Research and the Whitaker-Lindgren Faculty Fellowship.

Support for Sen. Elizabeth Warren has dropped by nearly 10% over the past month, according to the latest Iowa State University/Civiqs poll of Democratic presidential candidates. This shift has helped propel Mayor Pete Buttigieg to the top of the poll, with 26% of those surveyed s electing Buttigieg as their top choice.