These are computer models of replacement aortic heart valves. The models show biological tissues built into the valves at thicknesses of 100%, 75%, 50% and 25%. You can see fluttering in the thinner tissues at the bottom. See video. Image courtesy of Ming-Chen Hsu.

AMES, Iowa – You’re in the middle of the aorta, the body’s pipeline for oxygen-rich blood, looking back toward the heart’s primary pump, the left ventricle.

The ventricle muscle contracts and the aortic heart valve’s three leaflets explode open and blood flows by at up to 200 centimeters a second. And what’s this?

Those three leaflets are flapping in the flow – fluttering, in engineering terms. That’s a problem. It could lead to leaflet tearing, calcium deposits, fatigue failure, even damage to the blood flowing by. 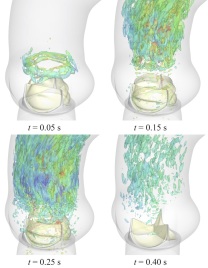 the performance of replacement

tissues from cows or pigs, during

We have an eyewitness look, from a physically impossible point of view, thanks to computational models of the fluid-structure interactions of blood and heart valves developed by engineers at Iowa State University and The University of Texas at Austin.

The engineers used their technology to study what happens when thinner and thinner biological tissues from cows or pigs are used in transcatheter aortic valve replacement. That procedure involves collapsing an artificial valve into a catheter that is threaded through an artery to the aortic root, where it expands and secures itself in place. It makes sense to choose thin tissues when building the replacement valves – thinner tissues can be folded into smaller catheters for easier movement through the narrow tubes of the arteries.

But, in side-by-side models comparing tissue thicknesses of 100%, 75%, 50% and 25%, you can see there are problems with the two thinner options.

The engineers’ comparison of the performance of thinner valve tissues was supported by grants from the National Institutes of Health.

Years and years of challenge

It’s not easy to develop a predictive computational model of a heart valve in action, said Iowa State’s Hsu, who has been modeling heart valves for more than five years.

There’s constant contraction, pressure and flow. The valves are flexible. It’s a highly dynamic system, with a lot of variables.

“We’re really modeling the whole physiological system,” Hsu said. “That’s why it has taken several years to correctly model the blood flows, which can change from laminar to turbulent, the heart valves, which are very thin and nonlinear, and the multiphysics coupling, which can be numerically unstable.”

This kind of modeling takes supercomputing power, Hsu said. The valves in this study were simulated using computing resources at the Texas Advanced Computing Center, with each cardiac cycle taking about two days to run on 144 processing cores.

But this is a problem worth the time and effort. Any time a replacement heart valve wears out, patients face another heart procedure. That makes avoiding leaflet flutter in a replacement valve a “crucial quality criterion,” the engineers wrote.

Let’s investigate the science, too

Hsu credits Johnson, a doctoral student in his lab who also works on wind turbine modeling, with helping him take his lab’s work further in a new direction.

“My background is in computational methods,” he said. “But students suggested we should look more at the science questions, too. We’re not just developing computational tools anymore.”

In this case, the computer models and resulting videos make the science easy to see and understand. (As Hsu says, “I think videos are the best way to show our results.”)

When thrown open by a pumping heart, the thinner leaflets buckle in the middle and flutter in the blood flow. “It’s like a flag flapping,” Johnson said.

She said the engineers were able to quantify the flapping and found that thinner tissues had as high as 80 times more “flutter energy” than thicker tissues.

The resulting conclusions are clear as the engineers’ views of the fluid-structure interactions inside a heart valve:

“Considering the risks associated with such observed flutter phenomena, including blood damage and accelerated leaflet deterioration, this study demonstrates the potentially serious impact of introducing thinner, more flexible tissues into the cardiac system.”

Iowa State and University of Texas engineers have developed high-fidelity computational models of replacement heart valves to examine the performance of biological tissues built into the valves. They found that thinner tissues can flap and flutter, which can damage the valves and even the blood that flows by.

“Considering the risks associated with such observed flutter phenomena, including blood damage and accelerated leaflet deterioration, this study demonstrates the potentially serious impact of introducing thinner, more flexible tissues into the cardiac system.”

Iowa State and Texas engineers, writing in the Proceedings of the National Academy of Sciences