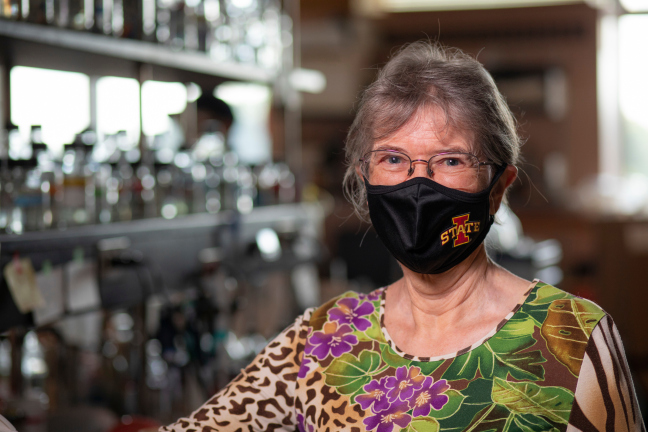 Marit Nilsen-Hamilton and her collaborators have had to adhere to physical distancing requirements while continuing their research during the pandemic. That effort includes stepped-up communication about work schedules and anonymous surveys so team members can voice concerns. Photo by Christopher Gannon. Larger image.

AMES, Iowa – Scientists at Iowa State University are taking steps toward perfecting an innovative testing platform that could allow for the detection of the virus that causes COVID-19 without a medical laboratory.

Engineers are designing the platform to resemble a mobile phone, which would make the technology more transportable and versatile than the most widely used testing methods. Progress on the new testing approach has continued despite challenges posed by the ongoing pandemic, requiring the research team to adhere to physical distancing requirements and reevaluate how it conducts its work, said Marit Nilsen-Hamilton, a professor in the Roy J. Carver Department of Biochemistry, Biophysics and Molecular Biology.

Nilsen-Hamilton’s company, Aptalogic, is working with Wendy Maury, a University of Iowa virologist; and Pranav Shrotriya, a professor of mechanical engineering at Iowa State; to develop the technology. Nilsen-Hamilton said the researchers are exploring multiple avenues to make the testing technology as versatile as possible. One avenue requires the isolation of nucleic acids called aptamers that behave like antibodies in the human immune system. Aptamers can be selected in the laboratory to bind to the spike proteins of coronaviruses, creating a method for detecting the virus in samples.

Separately, as part of their research activities in the university and campus laboratories, the researchers also are using the same sensor apparatus to try to detect virus particles directly. One of the most widely used testing methods, called a polymerase chain reaction (PCR) test, requires technicians to extract RNA from a viral sample. The method under development by Nilsen-Hamilton and her colleagues would skip this step and allow for the direct detection of viral particles – without the need for a laboratory or health care facility.

The testing platform could identify viral particles in saliva or blood samples, Nilsen-Hamilton said. It even has the potential to detect the virus in the air or on surfaces, she said.

“If you can detect the virus without having to go through the step of extracting anything, like RNA, then you can test saliva samples or you could test air samples,” Nilsen-Hamilton said.

“We’re looking for the simplest kind of assay, which would detect the virus particle. That avoids a lot steps.”

Keeping research progressing during a pandemic

The Aptalogic researchers continue their work to identify aptamers for the testing platform as well. The process involves going through a library of DNA molecules to determine candidates that can bind to the virus’s spike protein. Nilson-Hamilton said the laboratory starts with millions of possibilities that are narrowed down to around 40,000, which are then tested in the laboratory. But narrowing down the field of potential molecules to those that are the most suitable takes time.

“I’ve always taken the approach that if we have a problem in the lab, we discuss it as equals without identifying everybody,” Nilsen-Hamilton said.

Researchers continue work on a new testing platform that could detect coronavirus particles in the air without the necessity of a laboratory to process the results. The scientists have had to take an innovative approach to their work to negotiate the challenges of physical distancing.

“If you can detect the virus without having to go through the step of extracting anything, like RNA, then you can test saliva samples or you could test air samples. We’re looking for the simplest kind of assay, which would detect the virus particle. That avoids a lot steps.”