A derecho debrief: Not even a scientist/storm chaser expected the August 10 storm 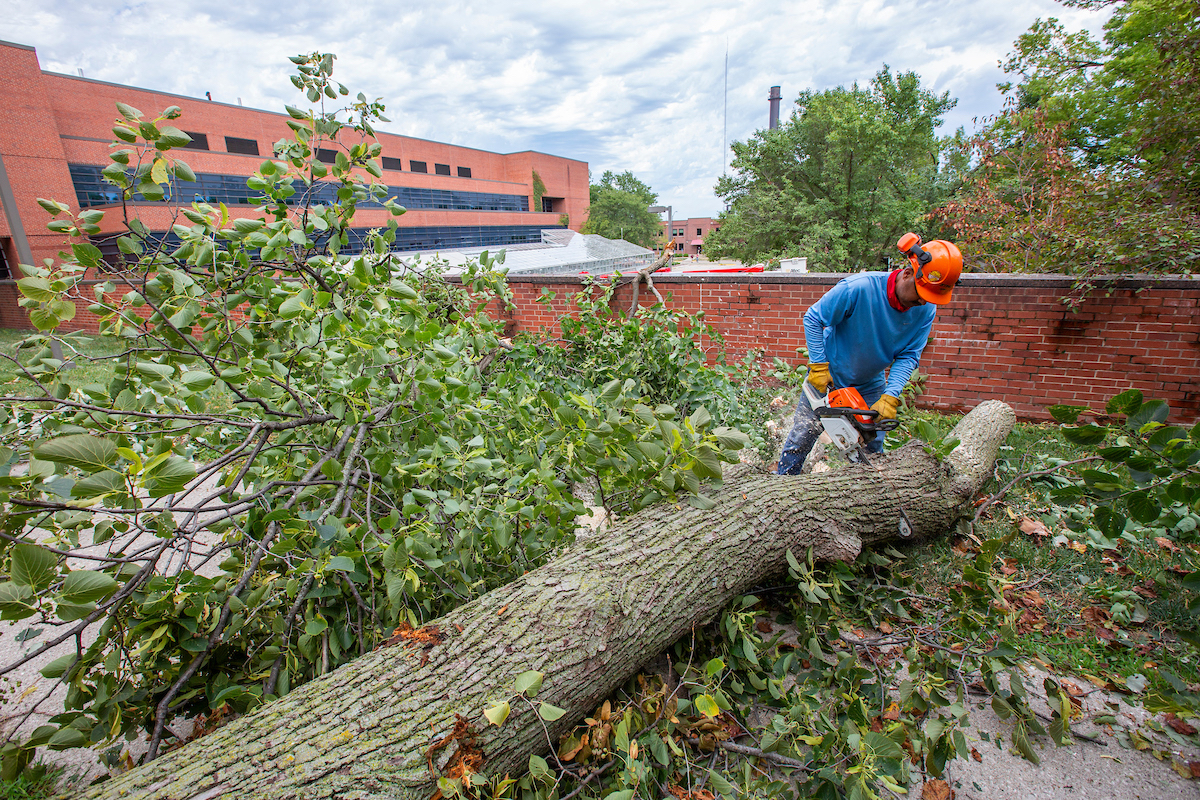 AMES, Iowa – On Sunday night, Aug. 9, Bill Gallus said nobody was talking about severe storms – or even rain – hitting central Iowa over the next five days. That was also true early the next morning.

“The last thing in the world you’d expect was this incredible event,” said Gallus, an Iowa State University professor of geological and atmospheric sciences and an experienced storm chaser.

That incredible event was the Aug. 10 derecho, described by the National Weather Service’s Des Moines office as "widespread, destructive straight line winds.” Those winds blew over trees across Ames and the Iowa State campus. The resulting power outages lasted days and, in some towns and neighborhoods, more than a week.

Gallus – who’s been part of a research project that collected data from the rear flank downdraft of tornadoes and is now working to use machine learning tools to improve the weather service’s database of storm information – says analysis of the storm will keep scientists busy.

The main question to be answered: Why didn’t this storm show up in forecasts?

The ingredients of a derecho

Gallus said two conditions generally come together to create a derecho and its destructive winds: strong, 50-plus mph winds miles up in the atmosphere and unstable, hot and moist weather near the ground.

Then, if something triggers a thunderstorm – maybe a warm or cold front – the storm taps into the cold, heavy, fast-moving air high in the atmosphere. Gravity even helps pull it down and accelerate it.

And here comes the violent wind.

“There’s a lot of talk that this derecho was one of the most intense ever,” Gallus said. 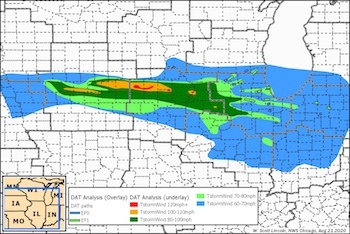 National Weather Service maps show winds of at least 60 mph from the western edge of Iowa to eastern Indiana. Winds of at least 80 mph stretched from west-central Iowa to north-central Illinois. And then there’s a stretch of 100-plus mph winds over Iowa’s Marshall, Tama, Benton, Linn and Jones counties, including Cedar Rapids.

“It’s shocking to have that large of an area getting 100 mph winds,” Gallus said.

He’s also heard reports that those high winds lasted for 40 minutes in some parts of eastern Iowa.

“In Ames, 10 minutes of violent wind was very stressful,” he said. “There’s a lot more damage when winds last that much longer.”

A trend or not?

Could climate change mean we see more and more of these storms?

Gallus said it’s hard to say. First, there are only a few derechos across the country every year, so it’s hard to establish a trend line. The sample size is just too small. (In fact, Gallus said the only other derecho-like event he’s seen in 25 years in Ames was a middle-of-the-night storm back in 2010.)

Second, warmer weather does create warm, moist and unstable conditions. But third, climate change is increasing warmth faster at the poles than the equator, which tends to diminish the winds high in the atmosphere.

“So, those two conditions necessary for a derecho tend to move in opposite directions,” Gallus said.

He’s sure, though, that scientists at the National Severe Storms Laboratory in Norman, Oklahoma, and at universities across the country will do more to understand these storms.

Gallus thinks one of the most important objectives will be figuring out how to give people more notice that violent, straight-line winds are on the way.

“Hurricanes come with days of notice,” Gallus said. “With this derecho, the National Weather Service did a very good job to give 20 to 40 minutes of notice. Beyond that, this storm was very poorly forecasted.” 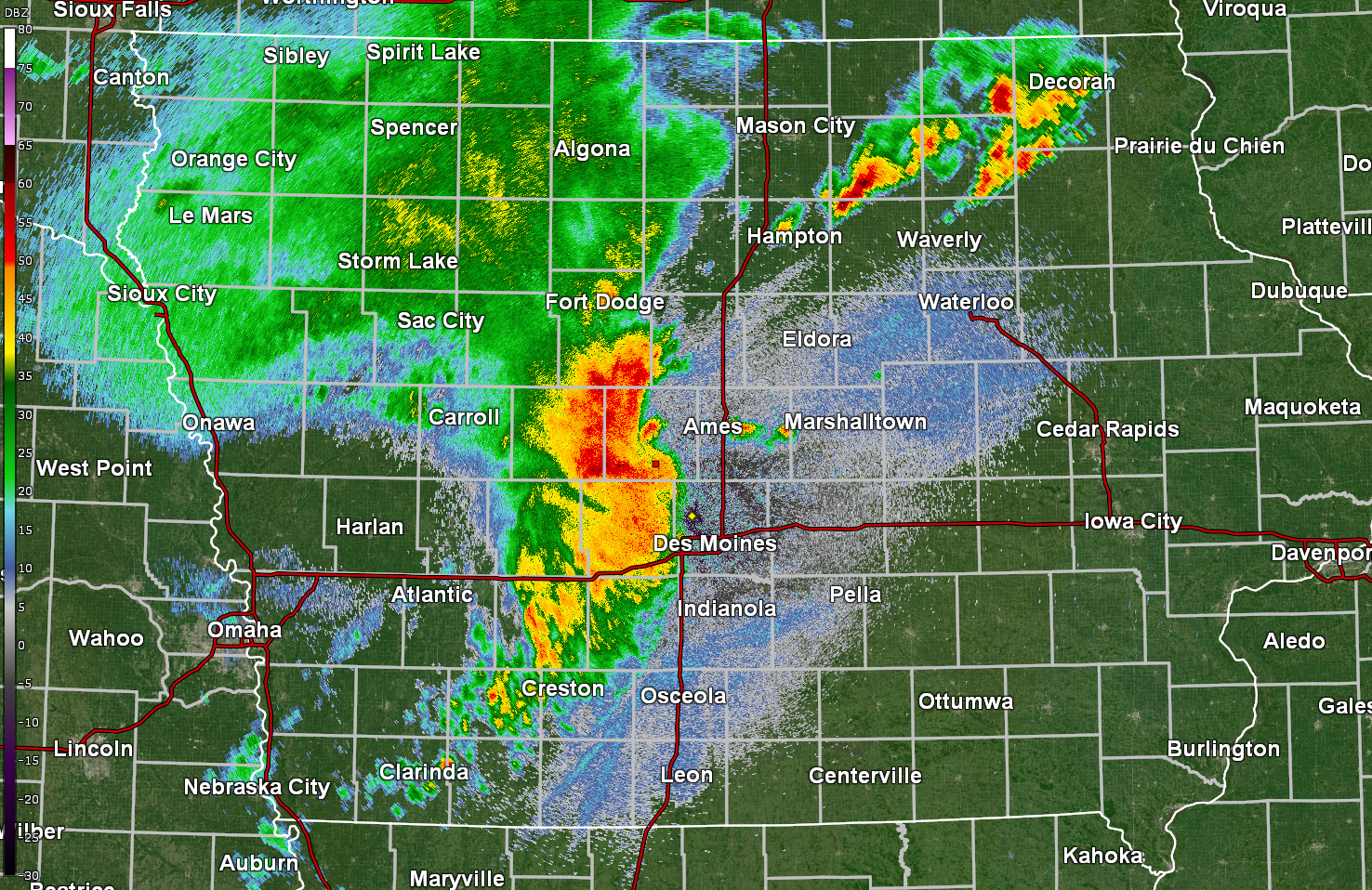 Bill Gallus, an Iowa State storm expert (and chaser), was as surprised as anybody by the Aug. 10 derecho that blew across Iowa and the Midwest. He expects researchers will take a good look at why the violent, straight-line winds didn't show up in forecasts. And does a warmer climate mean more of these storms are coming? Gallus said it's hard to say for several reasons, including the fact there are too few of the storms to establish much of a trend line.

“It’s shocking to have that large of an area getting 100 mph winds.”