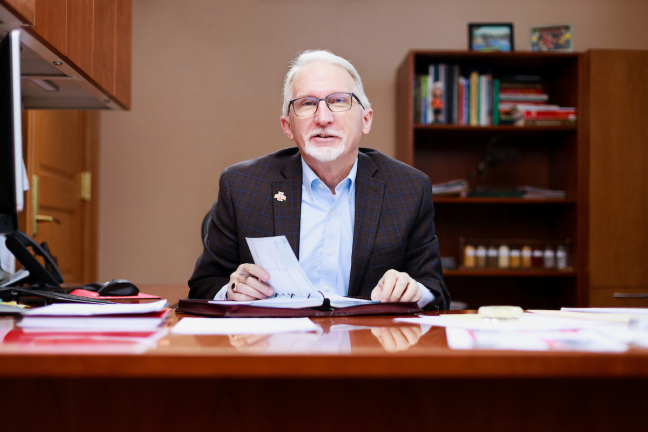 John Lawrence, vice president for ISU Extension and Outreach, led fall planning efforts to bring students back to campus. Photo by Ryan Riley (This photo was taken with physical distancing measures in place)

John Lawrence was no stranger to taking on big assignments.

And not to mention the frequent responses to natural disasters, economic crises and other challenges that are familiar territory for someone whose ISU career has been inextricably linked to extension and agriculture for three decades.

But these experiences pale in comparison to the assignment Lawrence took on last April — chairing the executive committee for fall-semester planning.

In April, Lawrence was working from his home office and remembers the phone call from Senior Vice President and Provost Jonathan Wickert.

“The Provost and I visited about fall planning and the role I could play,” he says. “Because Extension and Outreach is statewide and not centered solely on campus, and honestly, no real turf to protect, and because I had great leaders in extension who could fill in for me, I was perhaps in a better position to take on an assignment like this.”

That, and as mentioned, his wealth of past experience herding cats — in situations with many different kinds of cats — definitely came in handy.

(Later, Lawrence heard from an extension counterpart at another land-grant university who got a similar call from his senior leaders, and was playing a major role in their campus fall planning. “John,” the colleague said, “I guess this is just what extension people do.”) 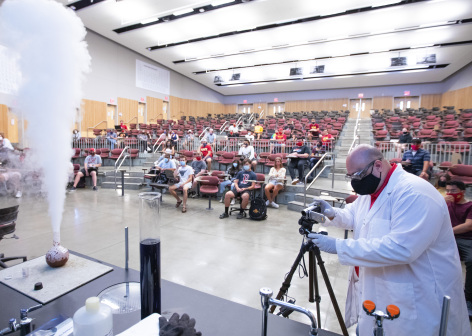 The fall planning committee met daily for months working out all the details to restart teaching and research on campus. Photo by Christopher Gannon

The fall executive committee’s task was deceptively straightforward and monumentally complex: Plan how the university could safely reopen and restart its teaching and research programs on campus, after having sent students home at spring break to finish the spring semester.

One word would adequately describe the list of general principles guiding the committee’s work: Daunting.

Nearly all things considered, from health and safety, academic support, classroom plans, research support, residence halls and dining, communications, and always keeping an eye on budgetary impacts. And many of them interlocking and overlapping.

“That’s why we had a fall planning committee with representation from many different facets of campus,” says Lawrence. “That made it possible to take a multidimensional view at any issue. We could take into account how a classroom issue would link to housing and Facilities Planning and Management (FPM) and what all of it meant for finance. If a proposal or idea came up, we looked at it from all angles. We could shoot it full of holes or strengthen it and move a recommendation forward to President Wintersteen and her senior leadership team for a decision.”

“I can’t say enough about how our committee stayed on task and engaged,” Lawrence says. “For months, we met every day, plus extra time on Fridays. We connected regularly with senior leaders and with committees dealing with individual pieces of the puzzle. We invited people from around campus to talk to us about their concerns.”

Major decisions were numerous, but included reduced classroom capacity, required face coverings in classrooms, offering a selection of in-person, hybrid and online courses, guidance on cleaning and sanitation, and the implementation of the targeted testing strategy for symptomatic students, faculty and staff.

Amazingly, however, no detail was too small. There were “picnic table” moments.

“We wanted more students to be able to study outdoors, so we needed more Wi-Fi hot spots,” says Lawrence. “ITS jumped on that and made it happen. Then, where were the students going to sit? We needed tables. We learned that Veenker Memorial Golf Course had picnic tables, so we moved them to campus.”

“So, yes, sometimes we’d get down in the weeds,” he says. “But in a way, those small actions allowed people to solve a specific problem quickly and take a short break from the time spent on bigger decisions with many more variables to weigh. It was just: Oh, we need tables.”

With the bigger issues, sometimes the journey to a decision was deliberately (i.e. maddeningly) slow. “I probably wasn’t the only one who, at times, thought this is like pulling teeth,” Lawrence says. “But often we were waiting to get more or other kinds of input, and that made a big difference in achieving the best decision.”

In July, Lawrence was interviewed by a reporter with a national publication. From the tone of the questions, Lawrence got the impression the story would focus on the belief that any fall-semester plan, no matter how well-executed, was bound to fail.

ISU’s fall planning proved the belief wrong. But not without its share of nerve-wracking moments.

On the warm, sunny Saturday of August 15 — two days before the fall semester began — Lawrence picked up President Wintersteen at the Knoll to drive to the Jeff and Deb Hansen Agriculture Student Learning Center. They were going to attend the Iowa Governor’s Charity Steer Show, which ISU hosted after the Iowa State Fair was cancelled.

As they made the turn into campustown, a sight made their stomachs drop. Large groups of young partiers crowded the lawns and sidewalks.

“We both just looked at each other,” Lawrence said. “This was not good.”

That was the now infamous “801” day that put Iowa State in the national news — not in a good way. A few days after, the university adopted a COVID-19 safety policy for student social gatherings.

ISU survived that first big test, rode out the subsequent spike in positive cases and then began to see the numbers drop. Lawrence did some second-guessing on his own, wondering whether the social gatherings policy should have been in place sooner.

But later in the fall, he received a valuable insight — from his doctor.

“At my annual exam, all my doctor wanted to talk about was the university’s response to COVID-19,” he says. “He sincerely congratulated Iowa State, and noted specifically the social gatherings policy. He told me it probably came at the most effective time possible. If it had been too early, nobody would have believed it or paid attention. If we had waited any longer, those kinds of behaviors would have continued. I hadn’t thought about it that way.”

“Still,” he adds, “it was a pretty rough start to the semester.”

But Lawrence and the fall planning executive committee felt good seeing students back on campus. “That was our plan, how to bring them back safely. After we survived the first part of the semester, and the Cyclones Care behaviors started taking hold, I began to realize that what we’d laid out was working. The students were going to be with us to semester’s end.”

Lawrence is quick to share credit not only with all the committee members and its dedicated support staff — Julie Kieffer of Conference Planning and Management and Nate Easter of ISU Research Park — but for the hundreds of faculty, staff and students who pitched in.

“This wasn’t just one committee or set of committees. This truly was an all-hands-on-deck effort. I was extremely proud of everyone’s efforts, campuswide. But that’s what I expected — Iowa State would prevail.”

President Wintersteen agrees. “I’m deeply grateful for the essential role and excellent work of the Fall Planning Executive Committee, chaired by Dr. Lawrence. This group, made possible with engagement by units and individuals from every corner of campus, reviewed critical data and helped us make dozens of decisions that were the basis for the final plans. I appreciate everyone who shared their ideas, innovations and concerns that went into making our fall semester possible and successful.”

Although the fall planning executive committee has disbanded, Lawrence continues to stay engaged with the university’s emergency operations center. Earlier this month, he was a key liaison in the partnership with Corteva AgSciences to offer the company’s newly developed, self-administered COVID-19 test for free to asymptomatic persons.

Shortly after he (mostly) returned to his regular vice president responsibilities, he found himself looking at a request from one of extension’s thousands of master gardeners statewide to carry over volunteer hours into the new year.

Learn more about ISU’s pandemic response in a collection of stories highlighting some of the hard work, dedication and collaboration across campus.