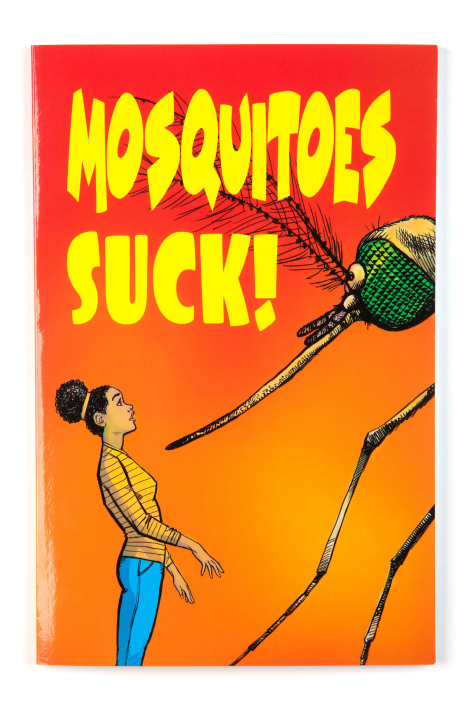 AMES, Iowa – The story begins in the year 2080 and the American Museum of Natural History – forced to relocate from New York City to Des Moines due to climate change – is featuring an exhibit on the history and extermination of mosquitoes.

The fictional depiction of a world without mosquitoes may sound appealing to anyone who has been a victim of the summertime pest, but the comic book “Mosquitoes SUCK!” (both literally – they suck, instead of bite – and some may argue figuratively) tells a story of the devastation and disruption to the ecosystem if the species was eliminated.

“Everybody has the same reaction to mosquitoes because they are so annoying,” said Katherine Richardson Bruna, one of the comic book authors and a professor in Iowa State University’s School of Education. “But we don’t want to end up with this dystopian future where mosquitoes no longer exist.”

The comic book, illustrated by a team led by Marvel artist Bob Hall, was inspired by Mosquitoes & Me Summer Camp, a two-week camp for elementary students that's part of ISU’s Urban Ecosystem Project, that focuses on the study of mosquitoes as a way to engage student curiosity and interest in science. The book features three stories as well as posters and short essays developed from the camp’s curriculum on mosquito biology and ecology, disease transmission and community-based control efforts.

Richardson Bruna says research has shown science comics help students learn more effectively, because of how they engage with the text and images. She and coauthors Sara Erickson, program coordinator for ISU’s Urban Ecosystem Project; and Lyric Bartholomay, a professor at the University of Wisconsin-Madison, created the comic book with a goal to teach readers of all ages how mosquitoes relate to environmental and sustainability issues, as well as spark an interest among younger readers in science.

“The Centers for Disease Control and Prevention has stressed the need for more entomologists to study insects and disease transmission,” Richardson Bruna said. “Our hope is that the comic book will inspire an interest in mosquitoes and a broader interest in entomology to address some of these societal and environmental needs.” 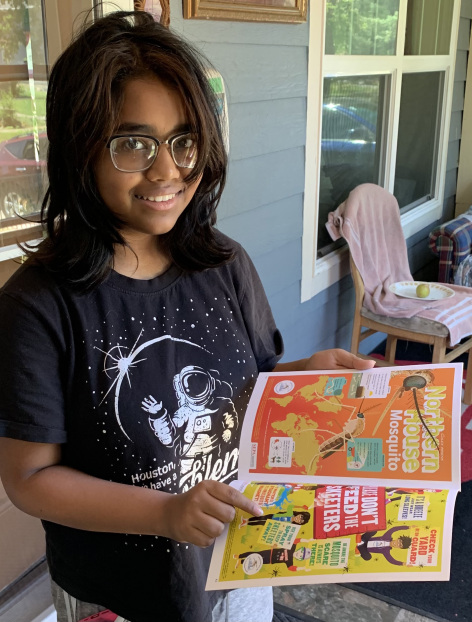 Nikunja Budathoki, a member of the comic book project, recently received her copy of "Mosquitoes SUCK!" Her illustrations were inspiration for one of the posters. Photo provided by Katherine Richardson Bruna

It has already inspired students to develop characters and content for their own comic book stories. As part of a National Institutes of Health grant that supported the comic book, Richardson Bruna, Erickson and Bartholomay launched the Mosquitoes & Me Comic Book Project.

Students, who had previously attended the summer camp, were invited to be part of the after-school program. They not only learned about what makes a good comic book, but had the opportunity to apply what they learned in camp. Their stories and the creative process are part of display at the Student Innovation Center on campus. And one of the posters in “Mosquitoes Suck!” features images based on the students’ illustrations.

Richardson Bruna says they are providing copies of the comic book to teachers across the state of Iowa, ISU Extension and Outreach educators and the Wisconsin Institute of Discovery. They’ve also received requests from the World Food Prize Foundation, international partners in Ecuador and Bolivia, the Institute for Global Environment Strategies, among others. To request more information contact: sepa@iastate.edu.

A world without mosquitoes may sound appealing to anyone who has been a victim of the summertime pest, but a new comic book titled "Mosquitoes SUCK!" tells a story of the devastation and disruption to the ecosystem if the species was eliminated. 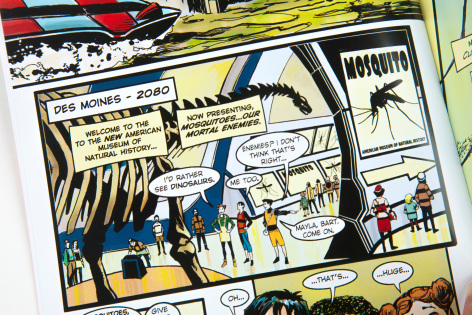 Illustrations from the Mosquitoes & Me Comic Book Project are part of an exhibit on display at the Student Innovation Center on campus. 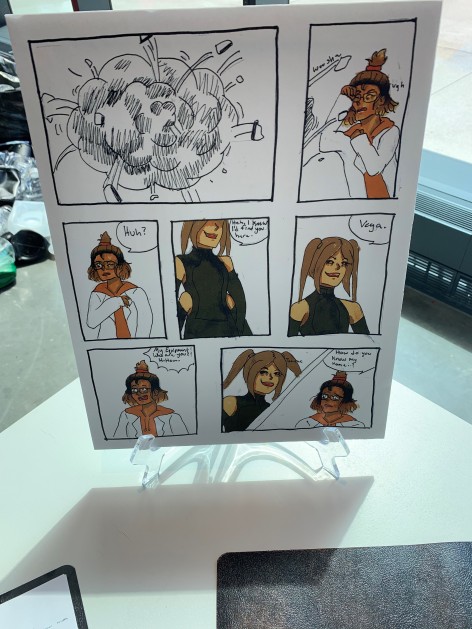