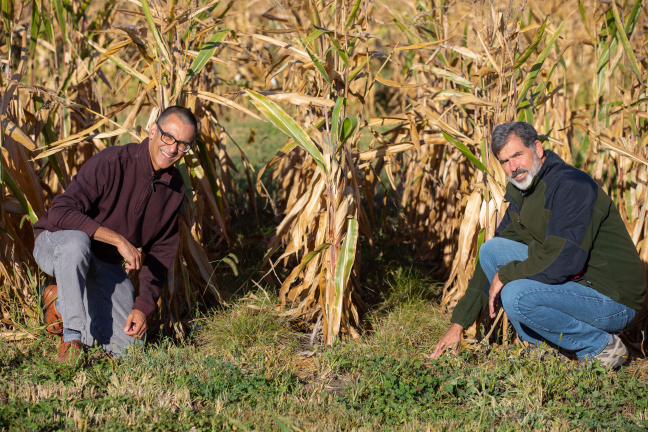 A diverse team of 18 scientists led by D. Raj Raman, Morrill Professor of Agricultural and Biosystems Engineering at Iowa State, received a five-year, $10 million grant from the U.S. Department of Agriculture’s National Institute of Food and Agriculture to study the potential environmental benefits afforded by perennial grasses, which grow every year without having to be planted or harvested, between rows of cash crops. The grant originates from USDA’s Agriculture and Food Research Initiative (AFRI) Sustainable Agricultural Systems program.

“We think because it’s a perennial, if we do it right, it might be done at extremely low cost to the producer,” Raman said. “It might even be possible that farmers might realize some economic benefit by implementing this practice.”

Cover crops typically involve annual plants, such as oats or cereal rye. Planting cover crops on farmland puts roots in the ground before or after the growing season for cash crops like corn and soybeans. And those roots hold soil in place, providing critical environmental benefits such as reducing soil loss and keeping nutrients from leaching into waterways. But annual cover crops require farmers to plant and harvest them every year, a labor-intensive and costly process.

So Raman and his colleagues are reimagining cover crops.

What if you could plant a perennial grass that grows in the spaces between rows but won’t compete with cash crops for nutrients and won’t affect yields? What if that perennial grass naturally senesces, or goes dormant, during the times of the year when corn, soybeans and other crops are developing? What if this hypothetical perennial groundcover required little effort to manage and didn’t reduce crop yields?

The project team is betting that some perennial groundcovers will check all those boxes and lead to much wider adoption of cover crops across the landscape, thus improving soil and water quality and providing a wide range of other environmental benefits.

“Developing practices that are likely to be implemented on large fractions of the Midwestern landscape is crucial to making a dent in the water quality and soil conservation challenges we face,” Raman said.

Finding a solution to the puzzle will require cross-discipline expertise in agronomy, plant breeding, soil science, horticulture, weed science, economics, sociology and engineering. The researchers will have to find the right combination of crops, perennial groundcovers and management practices. But the effort could be a game-changer for getting living groundcover on working farmland in Iowa and beyond, Raman said.

“That’s also why we built a team of researchers from six outstanding institutions beyond ISU, and why we garnered support letters from over 20 people representing farmers, conservation NGOs, seed producers, commodity groups, input suppliers, data management and digital ag entities, and bioenergy companies,” he said.

Members of the research team will attempt to breed crop varieties that are less sensitive to growing in what Raman refers to as a “green background,” or a field in which crops coexist with perennials. The research team will try to match the right crops with the right species of perennial groundcovers, so the lifecycles of the plants complement one another rather than compete. They’ll also study the ecological factors that come into play in such a cropping system, such as nutrient cycling and soil health.

The researchers will analyze the viability of a range of perennial groundcovers, including varieties of Kentucky bluegrass and a species called poa bulbosa, which goes dormant based on daylength. Poa bulbosa readily goes dormant during the crucial parts of the growing season in the Midwestern United States, making it a promising candidate for perennial groundcover, Raman said. Other attributes the researchers consider in the perennial species include short height and shallow roots, two traits that keep the perennials from crowding out corn plants as they grow.

The researchers will focus on perennials that either go dormant on their own or require minimal effort to suppress during periods of time that are critical to crops. That lessens the burden for farmers who may be interested in adopting the practice. Raman said it may even be possible for the practice to save farmers’ time and money by suppressing weed growth in fields. With fewer weeds to contend with, farmers would save on the time and money required to treat fields with herbicides. Anecdotal evidence suggests that perennial groundcover might even provide additional ammunition in the arsenal against herbicide-resistant weeds, Raman said.

The team will build on research completed by Kenneth Moore, a research team member and a Charles F. Curtiss Distinguished Professor in Agriculture and Life Sciences, who tested 35 perennial species for compatibility in previous experiments. Moore found that some perennials could provide ecosystem benefits without sacrificing crop yields – but only under ideal circumstances. Even minor variations in management or conditions can lead to significant yield reductions.

Moore describes the systems studied in previous experiments as “brittle.”

“It works until it doesn’t work,” Raman said. “When it doesn’t work, it fails spectacularly. That isn’t acceptable for widespread use, so the project team wants to find ways of making the system more reliable. We’re not there yet, but we think it’s possible for these practices to have a positive environmental impact with an economic incentive baked into the system.”

Iowa State University scientists are leading a multi-institutional effort to reimagine cover crops by using perennial groundcovers. They hope the effort will lead to wider adoption of perennial groundcovers in order to protect the environment and benefit crop production. The researchers recently received a $10 million grant to support their work.

“We think because it’s a perennial, if we do it right, it might be done at extremely low cost to the producer. It might even be possible that farmers might realize some economic benefit by implementing this practice.”