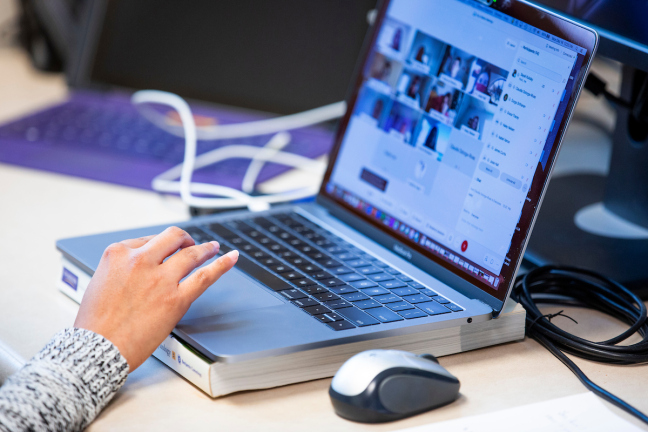 As the COVID-19 pandemic progressed in 2020, millions of people turned to Zoom and other remote meeting software to adhere to stay-at-home orders and prevent the spread of the virus. Larger image. Chris Gannon/Iowa State University.

AMES, IA – During the dramatic halt to in-person events in 2020, the use of video call software skyrocketed, transforming Zoom into a household name, opening the door to telehealth, and spurring ongoing conversations about the future of work. The COVID-19 pandemic will eventually subside, but videoconference calls, whether through Zoom, Webex or some other platform, are here to stay.

An innovative, first-of-its-kind study recently explored what people look at during virtual meetings. The findings from this and future research may help people avoid distractions and inform the future design of videoconferencing.

“If people are unable to focus on what's going on in the meeting, then maybe there's a way to improve the design of the platform to keep their attention and make the meeting more productive,” said Joey F. George, John D. DeVries Endowed Chair in Business and Distinguished Professor in Business.

George and his research team found the participants in their study did pay attention to whoever was speaking, but their gaze drifted off the computer screen more during small group video calls compared to large group sessions. The study also revealed women spent more time looking at their own image than men. George recently presented the findings at the Hawaii International Conference on System Sciences.

To collect data for their study, the researchers asked each participant to sit in front of a computer screen in a minimal, windowless room during two videoconference calls. The first included a 15-minute interactive Webex meeting with three other people and a fake user whose video and audio were turned off. Part-way through the meeting, the researchers introduced distractions: someone eating crackers and drinking soda, another adjusting their moving desk, which changed the user’s background.

Each participant then watched 10 minutes of a recorded Zoom video of a city council meeting. With two dozen people in attendance, the user frames shifted whenever someone new started to talk.

Underneath the computer monitor, the researchers had installed a state-of-the-art eye tracking system to measure where each participant was looking and for how long. The system’s array bounced infrared light off the participants’ eyes every four milliseconds, recording gaze movements and producing visualizations akin to airline route maps.

“The eye tracking gave us the opportunity to objectively record what people actually look at during one of these videoconference meetings, and we learned some surprising things,” said George.

During the small group, interactive video meetings, participants spent one third of the time looking at something other than the computer screen. As a comparison, participants spent 11% of the time looking off the screen during the large group video recording. The researchers also found people looked at the planned distractions (i.e., snacking, changing background) during the experiment, but only for several seconds before reverting their gaze.

The research team also found women looked at their own videos much more than men. As to why this might be, George pointed to a study from Stanford University last year in which women consistently reported more “mirror anxiety” associated with the self-view in video calls.

George said people adapted very quickly to virtual meetings during the first year of the pandemic, but the format still feels unnatural.

“How many in-person meetings have you been to where you sit on one side of the table, and everyone else sits on the other side of the table and looks at you the whole time? That would drive people crazy. We may see reactions from people across from us or turn our head when someone speaks, but we don’t see everyone’s face at the same time,” he said, adding that this staring or “hyper gaze” can trigger higher levels of stress and “Zoom fatigue.”

One of the co-authors of the paper, Assistant Professor Akmal Mirsadikov at Wichita State University, is following-up with the study by looking at whether participants were focused on the person speaking during the video call or their background. The results will be added to the researchers’ current working paper.

George said future experiments may find different behaviors and gaze patterns if participants sit through longer video calls. Results could also differ if the participants know the other people on screen.

“This was a first-of-its-kind, exploratory study and hopefully a launchpad for more research,” said George.

An innovative, first-of-its-kind study used eye-tracking technology to explore what people look at during virtual meetings, finding participants looked offscreen more often during smaller, interactive sessions and that women looked at their own video more than men. This and future research may help inform the future design of videoconferencing.

“If people are unable to focus on what's going on in the meeting, then maybe there's a way to improve the design of the platform to keep their attention and make the meeting more productive.”

"What do Users Actually Look at During ‘Zoom’ Meetings? Discovery Research on Attention, Gender and Distraction Effects," Scholar Space, January 2022