AMES, IA — In a small classroom in East Hall, ISU Police Officer Derek Doebel stands in front of a 10-foot-wide screen that skims the faded orange carpet and tiled ceiling. A projected image shows two men standing in a dusty backyard. One says, “Thank God you’re here; he needs help,” while the other cries, facing the opposite direction. 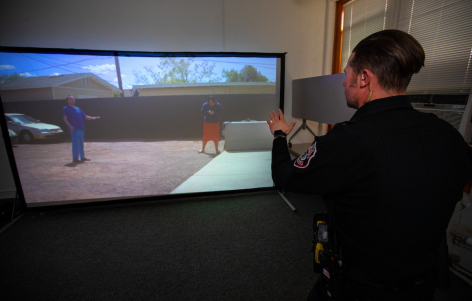 Doebel asks the second man several times to turn around, and when he complies, Doebel sees he’s holding a knife.

Kyle Burgason, an associate professor of criminal justice at ISU, watches from across the room as Doebel repeatedly asks the man to drop the knife. Burgason’s laptop lights up with several options to escalate or de-escalate the situation. He clicks one, which causes the man with the knife to become more agitated, saying “no one is listening” and “no one understands.”

Doebel says he can help the man find someone who will listen, but first he needs to drop the knife. More options appear on Burgason’s laptop. After making his selection, the man drops the knife, and the scene fades out.

“Mental health and de-escalation are huge now in law enforcement. VirTra-100 has specific curriculum to tackle that, along with an extensive library of other realistic scenarios for experiential learning on verbal commands, use of force, and its social intersections,” says Burgason.

The ISU Police Department has already started using the simulator for supplemental training.

“The more training we can do on de-escalation, the better off we are,” says ISU Police Chief Michael Newton. “This is just another tool we can use to put officers through real-life-like situations and hopefully learn and develop new skills.” 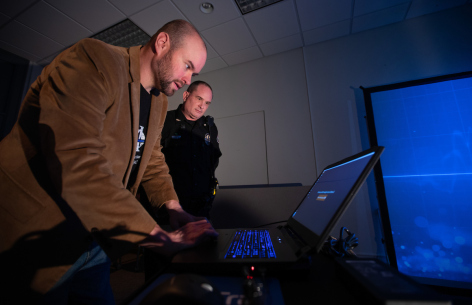 Newton says ISU Officers go through regular in-service roleplaying trainings, which are designed to mimic different scenarios they could encounter on campus. But one of the big advantages with the simulator is that Newton’s team can run through more scenarios per session since it requires fewer people and less set-up time compared to roleplaying.

Even though officers look at a flat screen, Newton says the scenarios still feel realistic.

“You immediately feel like you’re really there in the situation. You feel your heart rate increase, your respiration increase. Some officers have tunnel vision,” he adds.

These physiological changes can interfere with decision-making and emotional regulation. Newton says training under these conditions helps officers recognize how their bodies are reacting and practice techniques (e.g., focusing on longer exhales) that may prevent a stressful situation from escalating.

Later this year, Burgason wants to create a focus group with ISU students from Alpha Phi Sigma, the national criminal justice honors society, to design curriculum with the simulator for upper-level classes at ISU.

Burgason says students wanting to pursue a career in law enforcement need to have both a conceptual and practical understanding of the use-of-force continuum, which ranges from verbal skills on one end to lethal force on the other. Experiential learning with the simulator, Burgason explains, could help students grapple with some of the ethical and social nuances of use of force, especially when they may have less than a second to make a decision when the person on the screen pulls out a weapon.

Along with discussing what went well or could be improved upon at the end of each simulation, Burgason says the simulator could be used to help students practice communicating to dispatch and writing police reports. 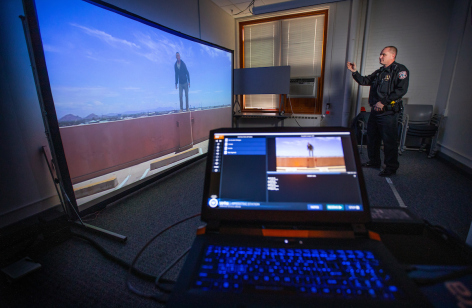 “One of the most important things a lot of new recruits don't know is how valuable written communication is for law enforcement,” says Burgason. “You have to turn police reports over to a detective to help solve a case, and you have to turn it in as evidence used in court.”

Burgason says the upper-level classes would likely require a screening process to ensure the students are serious about pursuing careers in criminal justice. He’s working with ISU PD and another local law enforcement agency to bring practitioners in as lecturers for the future classes.

Three to five years from now, if they can secure a larger space to house the simulator, Burgason and ISU Sociology Professor David Peters would like to offer training to rural police departments in Iowa, most likely through a symposium at ISU.

“There’s a huge mental health care shortage in rural areas. People may be hours away from a health care professional who can help, so police departments usually have to stabilize the situation and transport that individual an hour, hour and a half, sometimes two hours to a facility that can do an evaluation and help them address an issue,” says Peters.

Since rural jurisdictions may only have one or two officers on duty, responding to these kinds of situations can put a big strain on police departments. Peters adds that many of the smaller law enforcement agencies lack the time and funding for additional training.

“Officers may have received training 20 some years ago at the academy. We really want to reach out to those smaller PDs and give them the opportunity to learn about mental health and train for de-escalation,” says Burgason.

Whether supplementing the ISU Police Department’s training, giving criminal justice students experiential learning opportunities, or filling a gap in rural law enforcement, Burgason and Peters say the simulator is another resource that aligns with ISU’s land grant mission and commitment to education both on and off campus.

“Mental Health and de-escalation are huge now in law enforcement. VirTra-100 has specific curriculum to tackle that.”