AMES, Iowa – A new study that combines survey data and cutting-edge computer modeling found a growing trend in tillage intensity in U.S. corn and soybean production in recent years has led to an increase in greenhouse gas emissions from agricultural fields.

The study, published recently in the academic journal Nature Food, drew on years of survey data that asked thousands of U.S. farmers about their tillage practices. The researchers then plugged the relevant data into sophisticated ecosystem models to see how tillage decisions affect soil emissions of greenhouse gases, including carbon dioxide and nitrous oxide.

The survey data indicate farmers relied less on tillage during the period between 1998 and 2008, but that trend began to reverse around 2009 when tillage intensity started to rise.

Chaoqun Lu, an Iowa State University associate professor of ecology, evolution and organismal biology and lead author of the study, said the growing resistance of weeds to the common herbicide glyphosate likely contributed to increased tillage. Genetically engineered herbicide-tolerant crops hit the agricultural scene in the late 1990s, and their adoption freed farmers from some of their reliance on tillage as a method of weed control. But growing numbers of weed species with resistance to the herbicide have emerged over the decades, reducing the effectiveness of the herbicide and making tillage a more attractive weed control option once again. And as tillage intensity grows, more carbon and nitrogen stored in the soil release into the atmosphere in the form of greenhouse gases, Lu said.

“One of the interesting pieces that we found in this study is tillage intensity has shifted from a declining trend to an increasing trend since 2008,” Lu said. “Our regression analysis suggests this trend is correlated to the wide adoption of herbicide-tolerant crops before 2008 and emerging weed resistance after 2008. We can’t assert a strict causal relationship, but regression analysis reveals a strong relationship between them.”

The survey asked questions about farmers’ decisions on seed varieties and cultivation practice intensity. Survey topics included no-till, conservation tillage (e.g., ridge till, mulch till), and conventional tillage (e.g., moldboard plow, chisel plow, disk harrow). The data show no-till grew by roughly 12 million acres for corn production and nearly 17 million acres for soybeans between 1998 and 2008. But no-till corn acres declined by nearly a half million acres between 2009 and 2016 and declined by nearly 6 million soybean acres during that period, according to the survey. Corn acreage under conservation tillage and soybean acreage under conservation and conventional tillage showed similar trends, first declining between 1998 and 2008 before climbing back to previous levels by 2016.

Feeding the data into the land ecosystem models shows that gains in tillage intensity since 2009 have offset the greenhouse gas mitigation benefits achieved during the tillage declines from 1998 to 2008.

Lu said the study uncovers a relationship between weed resistance, seed technology and greenhouse gas emissions that could lead to a better understanding of how farm practices can mitigate climate change. Her team’s previous research showed that nitrous oxide emissions from farmland in the U.S. Corn Belt have increased in recent years, largely due to the widespread application of nitrogen fertilizers to agricultural land. The added nitrogen is partially used by crops, but the remainder either stays in soils or is lost to the environment. During this process, microorganisms living in soils consume nitrogen-containing compounds and give off nitrous oxide as a byproduct.

Meanwhile, soil organic matter decomposes and partially converts into carbon dioxide. Both are powerful greenhouse gases that have potential to warm the climate. Intensive tillage practices disturb the soil, alter soil moisture and aeration status, and stir heavy crop residue into soils, which together change the production rates of soil greenhouse gases and allow more of them to escape, Lu said.

Lu pointed to the use of alternative herbicides to combat glyphosate-resistant weeds, or using glyphosate in fewer consecutive years, as well as the diversification of crops beyond corn and soybeans as options to control weeds without increasing greenhouse gas emissions.

“Without an effective strategy to control weeds, tillage intensity could continue to grow in the future and could undermine greenhouse gas mitigation achievements from other agricultural activities,” Lu said. 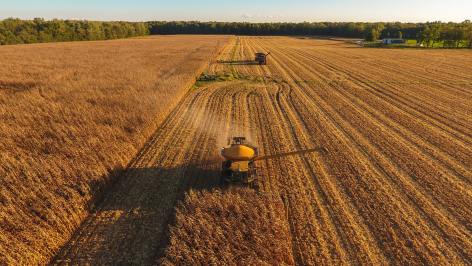 Tillage intensity has increased in U.S. corn and soybean production since 2008, and ISU researchers say that has led to an increase in greenhouse gas emissions from agricultural fields. Photo by Loren King.

“One of the interesting pieces that we found in this study is tillage intensity has shifted from a declining trend to an increasing trend since 2008. Our regression analysis suggests this trend is correlated to the wide adoption of herbicide-tolerant crops before 2008 and emerging weed resistance after 2008. We can’t assert a strict causal relationship, but regression analysis reveals a strong relationship between them.”