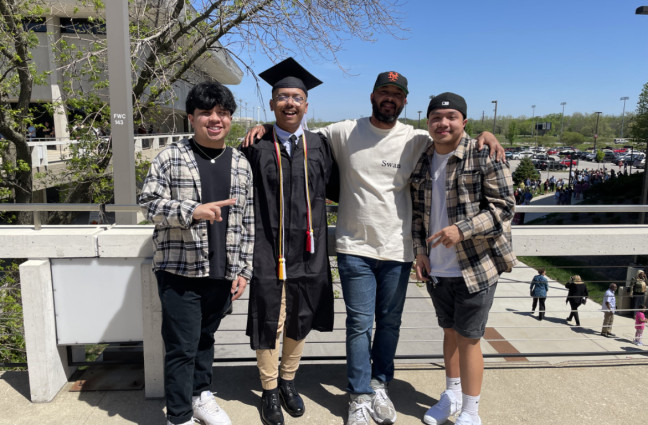 Darrick Burrage graduated from Iowa State with a bachelor's in performing arts in May 2022. From left, Jefferson Le, Darrick Burrage, Dontreale Anderson and Andy Le. Photo provided by Burrage.

Growing up in Des Moines, Burrage and his sister wove tales around their toys and action figures. He would stay up too late, enamored by the actors on TV. In high school, he spent much of his free time singing in choir and acting in school productions.

In May, he graduated from Iowa State University with a bachelor’s degree in performing arts. He is one of five students from the first ISU 4U Promise cohort to graduate. The program is a partnership between Iowa State and Des Moines Public Schools to forge a path to college for historically under-resourced students at two elementary schools.

“Growing up, I didn’t want to go to college because I didn’t know the true value of it,” Burrage said. “I started at Moulton Elementary, then went to North High School, which is right up the street. I tried my best to think of college as that route: point A to B to C.”

Once he had an opportunity to visit the ISU campus, he knew it was the next stop on his route. When he started at Iowa State in fall 2018, Burrage immediately got involved in Grandma Mojo’s Moonshine Revival, the student improvisation comedy troupe.

“I auditioned for Grandma Mojo’s and was very fortunate to have impressed them for whatever reason,” he said. “I put all my attention into it. It gave me a chance to be myself while also benefiting my goals and aspirations.

“I was always trying to be the funny kid in class.”

Burrage’s goal growing up was to act in a movie. He got his first taste of that through his performance in “nature of the dream,” a film exploring Black identity in Iowa that was produced by Two Steps to the Left Productions with assistance from the Des Moines Playhouse. Plus, it landed Burrage his first credit on an IMDb page.

“I never would’ve had that opportunity without ISU to help establish those connections,” said Burrage, who credits ISU Theatre Director Brad Dell with making that connection.

Acting in films no longer seems like a pie-in-the-sky idea.

“My dreams were validated, knowing there were opportunities to try to go ahead and cement them for myself,” Burrage said.

He thinks back to his childhood, creating characters and voices to go with his toys. Burrage says he has since learned how to turn himself into a character and commit to being that character for a period of time.

Katherine Richardson Bruna, founding director of ISU 4U and professor in the School of Education, says the students’ success is evidence of the power of reciprocal relationships with the youth, families and schools.

“Without ISU 4U, I don’t know where I would be right now,” Burrage said. “I had three or four different jobs while at college. I wouldn’t have made so many connections and so many friends.”

He said graduation day was “jarring,” particularly since his major is relatively small compared to others. Now, he’s on the hunt for acting opportunities.

Burrage hopes to one day fulfill a goal he shared with his grandparents as a kid: “Someday you’ll buy tickets to see me in a movie and you’ll see my name in the credits.”

His ultimate goal is more holistic.

“I want to find a sense of happiness in what I’m doing, whether that be in life, my work, who I surround myself with, etc.,” he said. “That has always been my goal in life, no matter what was going on in it.”

Growing up, Darrick Burrage would stay up too late, enamored by the actors on TV. In high school, he spent much of his free time singing in choir and acting in school productions. Now, he's an Iowa State grad in performing arts and is looking toward a future in film.