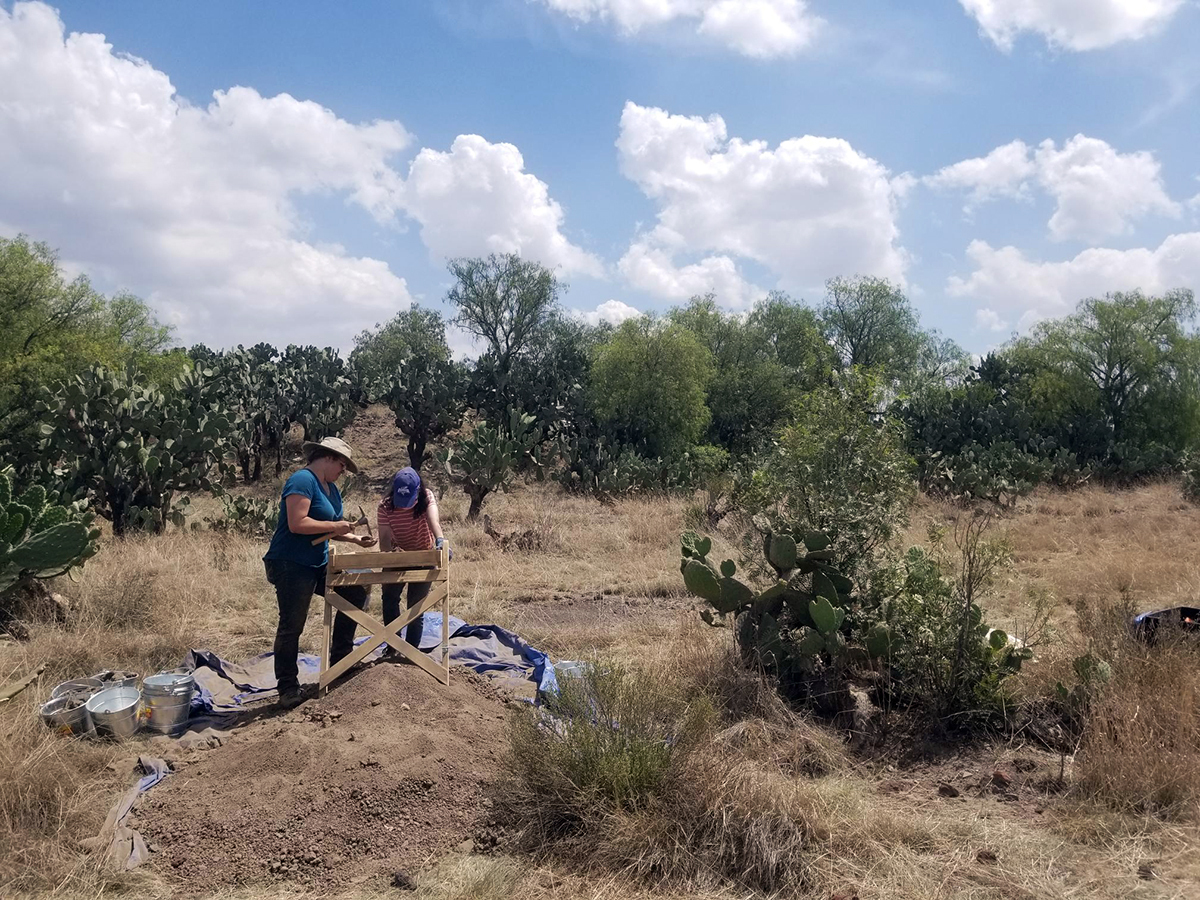 Feben Ruscitti, a senior majoring in anthropology and classical studies, and Serena Webster, a graduate student in anthropology, sift through dirt to recover any missed artifacts from the excavation site in Mexico, July 2022. Photo by Andrew Somerville/Iowa State University

Ames, IA – Built more than a thousand years before the Aztec arrived in central Mexico, Teotihuacan was once one of the largest cities in the world. Its stone temples, comparable in size to Egypt’s pyramids, still draw fascinated visitors, as does the mystery surrounding the city's sudden fall around 550 AD.

To help unlock clues, an international team of archaeologists has begun excavating one of Teotihuacan’s suburbs. They recently completed the first field season of a four-year project funded by the National Science Foundation.

Andrew Somerville, an assistant professor of anthropology in world languages and cultures at Iowa State University, is leading the project with Marion Forest, a visiting researcher at Arizona State University and archeologist affiliated with the French Center for Mexican and Central American Studies.

Somerville pointed to previous research indicating the population of Teotihuacan dropped 70-80% when the center of the city and all the temples were burned in what’s referred to as the “Great Fire Event.” Shortly after the collapse, however, a neighborhood called Hacienda Metepec grew from 800-1,500 people to around 3,000-4,000. 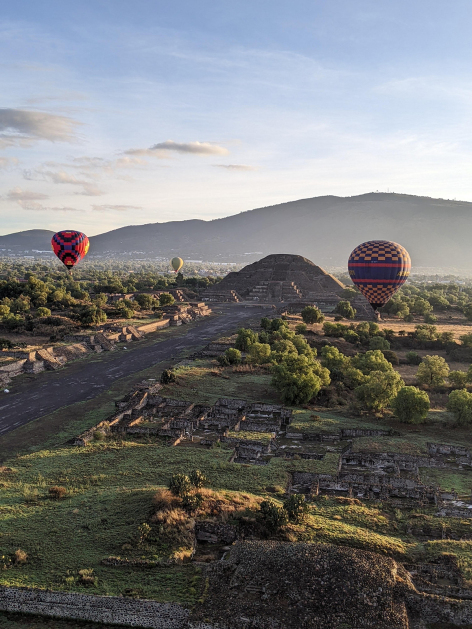 “A popular theory about the collapse of Teotihuacan is that foreign invaders were responsible for the fire and the collapse of the state. To test this, we are attempting to find out if the residents of Hacienda Metepec in the period after the collapse were descendants of the original Teotihuacan inhabitants or represent a newly arrived, different ethnic group,” said Somerville.

He explained the presence of imported goods or changes in ceramic styles shortly after the Great Fire may indicate an outside group moved in (i.e., external factor) while differences in the size and design of homes leading up to the collapse could suggest growing inequality played a role (i.e., internal factor.)

As part of the project, the researchers also aim to identify changes to trade networks, diets and the way food was produced in the hundreds of years before the Spanish arrived. Somerville added that understanding the decline of Teotihuacan and subsequent impacts over a long period of time could help modern-day urban centers avoid the same outcome.

Hacienda Metepec is roughly the size of five football fields. To save time and target certain areas where the team was more likely to find artifacts, Somerville and Forest collaborated with researchers from a university in Mexico City, Universidad Nacional Autonoma de Mexico (UNAM), to conduct an initial sub-surface survey last spring.

The UNAM researchers pushed a penetrating radar machine, which essentially looks like a lawn mower, and a magnetic gradiometer over the site to detect buried walls and corners.

In July, Somerville and Forest, along with students from Iowa State, UNAM, and the Sorbonne University in Paris, landed in Teotihuacan. They spent the following four weeks carefully working their way through layers of history.

Near the surface, they found tools from a ranch during the Spanish colonial period. Deeper down, the team discovered cookware from an Aztec kitchen – big olla pots to store grain or water and griddles. Then, below that, pieces of pottery and obsidian tools from the periods just before and after the Great Fire emerged. 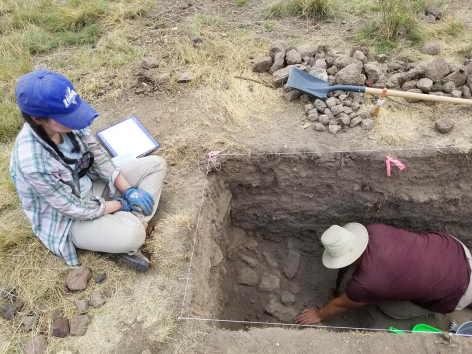 Each evening, after a full day of field work, the team washed and cataloged hundreds, sometimes thousands of artifacts.

“It’s a good thing that I enjoy monotonous tasks because there was a lot of cleaning and counting sherds and obsidian debitage – 4,440 pieces of obsidian in one sitting,” said Feben Ruscitti, a senior at ISU majoring in anthropology and classical studies.

Ruscitti had worked with Somerville in his Paleoecology Lab on campus and joined the research team this summer to gain additional field experience.

“Along with continuing to develop and refine my excavation techniques and artifact processing, I learned how to do a site analysis and was more involved in discussion and decision making,” said Ruscitti.

She added that she valued the opportunity to learn more about the culture of central Mexico and connect with locals.

For Serena Webster, an ISU graduate student in anthropology, being part of the research project at Hacienda Metepec was a boon to her thesis research, which focuses on the obsidian industry in Mesoamerica.

“I was able to analyze hundreds of obsidian artifacts during excavation,” said Webster. “I have always been very interested in Mesoamerican archaeology. This was an incredible opportunity to work on one of the most important sites in Mesoamerica.”

Because the site and its artifacts are part of the cultural heritage of Mexico, Somerville shared that the team applied for a permit with the Mexican government and will provide a detailed report after each field season. None of the artifacts leave the country and they’ll be turned over to the government at the end of the project.

The fieldwork in the summer of 2022 was an initial exploratory project, designed to find the outlines of the ancient buildings and to understand the stratigraphy of the soil. Beginning next summer, the project will increase in its scope, opening up larger excavation units and working with a larger team of international collaborators.

“I am looking forward to bringing more ISU students down to Mexico this upcoming summer, and I continue to be grateful for the opportunity and privilege to work on this important site with an incredibly talented and international team,” said Somerville.

Faculty and students from ISU joined an international team of archaeologists this summer to begin excavating one of Teotihuacan’s suburbs. The four-year project could help unlock clues about the ancient city’s mysterious collapse and what happened in the hundreds of years before Spanish conquistadors arrived in central America.

"A popular theory about the collapse of Teotihuacan is that foreign invaders were responsible for the fire and the collapse of the state. To test this, we are attempting to find out if the residents of Hacienda Metepec in the period after the collapse were descendants of the original Teotihuacan inhabitants or represent a newly arrived, different ethnic group."