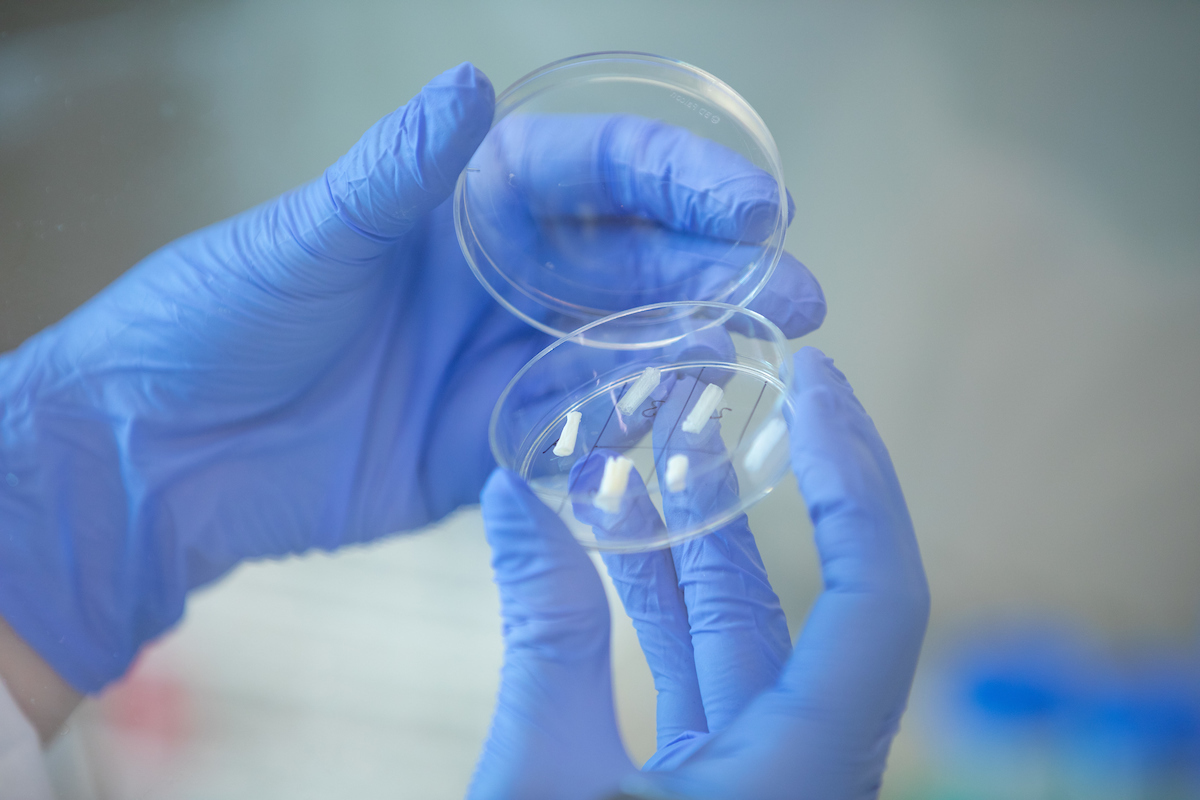 AMES, IA — Under a whirring cell culture hood at Iowa State University, two undergraduate students look at something resembling a tiny, white bone in a petri dish. Abigail Fowler, a senior majoring in microbiology, points to the cut ends with a tweezer.

“You can see those little channels that nerves would travel through. Some of these gelatin scaffolds have channels or microstructures that are larger, more symmetrical than others,” says Fowler.

She shows Bridget McGovern, a sophomore in biology, how to pipette a solution with neural stem cells onto the edge of the gelatin scaffold and then places the petri dish in an incubator set at the same temperature as the human body.

After three days, Fowler will teach McGovern and other undergraduates in the Sakaguchi Lab how to measure cell growth.

“One of the projects in our lab is trying to determine which scaffolds are best designed to stimulate nerve regeneration. If patients are severely injured from a car accident or blast event and are missing a segment of a peripheral nerve, the devices that we’re investigating could serve as a bridge to guide regenerating nerve fibers across that gap,” says Don Sakaguchi, a Morrill Professor of genetics, development and cell biology, director of ISU’s biology and genetics undergraduate programs, and a member of ISU’s Nanovaccine Institute.

Peripheral nerves, which are outside the brain and spinal cord, can grow back after most injuries. But the process is slow and without a signal or structure to help guide them, the nerve ends ball up and form scar tissue, Sakaguchi explains.

People with traumatic damage to peripheral nerves may experience a loss of muscle control, as well as severe pain, burning sensations, tingling or numbness in the area affected by the injury. In an effort to relieve their symptoms, around 700,000 people in the U.S. each year undergo surgery.

Currently, the most effective procedure for a severe injury, such as a missing segment of nerve, is an autologous graft, says Sakaguchi. A surgeon cuts out a section from an intact nerve from the patient and grafts it to the site of injury. However, this process has a low success and can create long-term nerve damage at the donor site. Multiple surgeries also increase the risk of infection.

Synthetic conduits, first introduced 20 years ago, offer an alternative with potential for a better recovery. 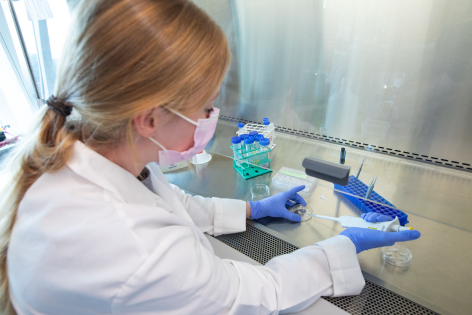 Fowler pipettes a solution with neural stem cells onto the edge of a gelatin scaffold. Larger image

The different variations of gelatin scaffolds being tested in Sakaguchi’s lab have not yet been used in humans. They were created by his research collaborators at the Izmir Institute of Technology in Turkey with a novel technique they developed. The highly enriched collagen gels give the structures flexibility and allows them to degrade over time, which Sakaguchi says would be important during the healing process.

A former Nanovaccine Institute postdoctoral fellow, Metin Uz, who now has his own lab at Cleveland State University, is also contributing to the project.

“Research teams like ours and around the world are continuing to investigate different structures and materials to figure out the optimal conduit,” says Sakaguchi.

Isabelle Lein, a sophomore majoring in biology, has just come from class and slides on blue nitrile gloves. Like McGovern, she joined Sakaguchi’s lab last semester and is being trained by Fowler in more advanced techniques to work on this project.

“My goal is to become a surgeon,” says Lein. “I could potentially be using these conduits in the future. This project has the potential to do something so big.”

The value of undergraduate research for students, faculty

Fowler, who plans to go to graduate school, says opportunities for undergraduate research played a big role in her decision to come to Iowa State University. She started working in Sakaguchi’s lab in the spring of 2020 through the First-Year Honors Mentor Program, which matches undergraduate students with research experiences across campus.

"Along with learning technical skills, being in this research lab has really helped me design experiments and problem solve,” says Fowler. “I know how to identify my questions and where the shortfalls are. I can talk to my mentor and figure out issues and solve problems as we go.”

An example of problem solving arose last semester. Fowler was trying to find a way to measure neural cell growth on the gelatin scaffolds. By reading literature reviews, talking with Sakaguchi and testing different methods, she developed a process involving a cell bio-stain, which causes dead cells to glow red and living cells to glow green, and a chemical reagent to more easily see the cells under the microscope. 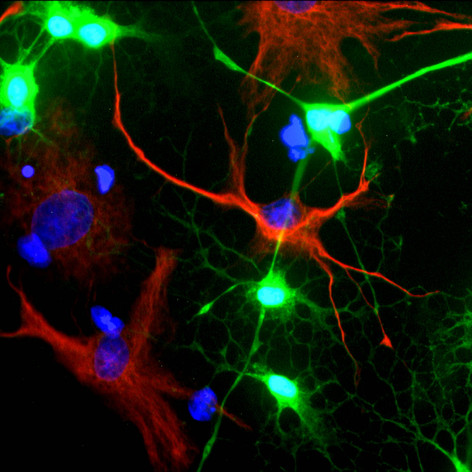 Fowler presented her work at the ISU Summer Undergraduate Research Symposium in August.

“Abby has really taken the lead on this project and figured out a lot of the steps necessary to do this research,” says Sakaguchi. “Undergraduate research trainees have become an important component of my lab's research efforts.”

Over the past three decades, Sakaguchi’s lab has hosted nearly 200 undergraduate researchers.

“One of the most influential experiences I had as an undergraduate biology major was the opportunity to conduct laboratory-based research,” Sakaguchi said. “As such, I have always provided research experiences to allow students to develop scientific skills by conducting research in a laboratory setting.”

He says mentorship has played a big role in his work to recruit, train, and retain underrepresented minority and female students into the lab.

Sakaguchi has organized his undergraduate research trainees into a vertically integrated project. He meets weekly with the students to discuss their project’s overall progress and identify and resolve challenges while more senior lab members train the newer undergraduates who then eventually train the next cohort. He points to Fowler, a senior, teaching sophomores McGovern and Lein, as an example of the “self-perpetuating undergraduate research enterprise."

Students are also encouraged to present their research in the lab, across campus and at conferences to improve their science communication skills. Several have even co-authored peer-reviewed publications.

He encourages undergraduate students to take advantage of the many research opportunities across campus. The Honors Program at ISU is one of many avenues.

“Just as it was for me, I believe that authentic research opportunities are transformative experiences and play a critical role in training our undergraduates for future success in STEM disciplines,” Sakaguchi said. 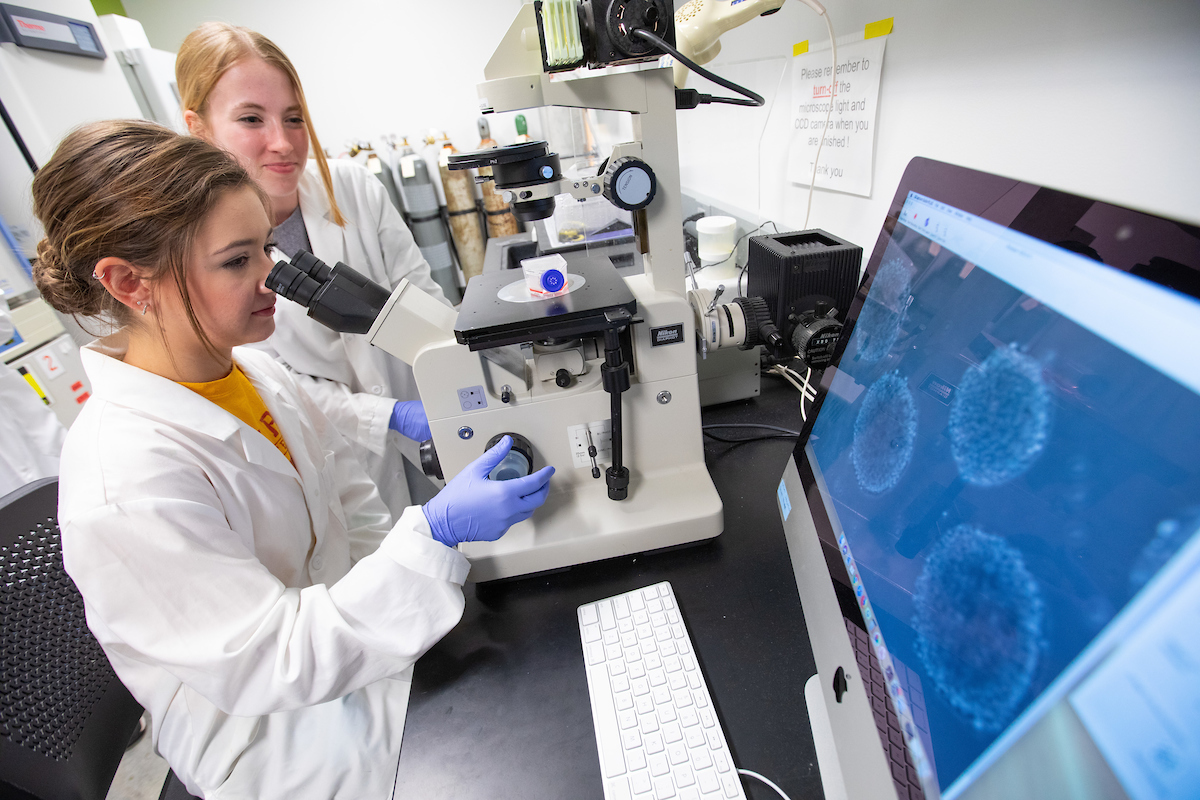 Abigail Fowler shows Bridget McGovern how to use a microscope to look at “mini brains” — spheres containing hundreds to thousands of neural stem cells that can differentiate into nerve cells. The students collect these cells to “seed” the gelatin scaffolds. Larger image. Christopher Gannon/Iowa State University

Undergraduate students at ISU are part of a research team testing different structures that could be used to help patients recover from traumatic nerve injuries.

"If patients are severely injured from a car accident or blast event and are missing a segment of a peripheral nerve, the devices that we’re investigating could serve as a bridge to guide regenerating nerve fibers across that gap."

"Along with learning technical skills, being in this research lab has really helped me design experiments and problem solve.”