Pulitzer-Prize winning journalist and Iowa native Nikole Hannah-Jones, creator of “The 1619 Project,” will appear at Iowa State University to present the 2022 Manatt-Phelps Lecture in Political Science at 6 p.m. on Wednesday, Nov. 2, at Stephens Auditorium. 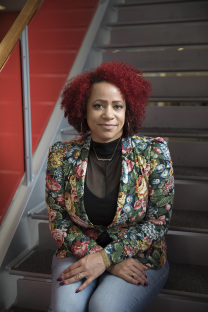 The lecture, titled “A Conversation About the 1619 Project,” is free, open to the public and does not require a ticket for entrance.

Hannah-Jones is a staff writer at the New York Times Magazine and the creator of “The 1619 Project,” an ongoing initiative to reframe American history with slavery and its continuing legacy at the center of the national narrative.

Hannah-Jones has spent her career investigating racial inequality and injustice, and her reporting has earned her a MacArthur Fellowship, sometimes referred to as “genius grants”; a Peabody Award; two George Polk Awards and three National Magazine Awards. She also serves as the Knight Chair of Race and Journalism at Howard University, where she founded the Center for Journalism & Democracy. Hannah-Jones is also the co-founder of the Ida B. Wells Society for Investigative Reporting, which seeks to increase the number of investigative reporters and editors of color. This year, she opened the 1619 Freedom School, a free, after-school literacy program in her hometown of Waterloo, Iowa.

The program will feature a question-and-answer session conducted by moderators with pre-submitted questions. Questions must be emailed to lectures@iastate.edu by noon on Nov. 2 to be considered. Questions submitted by ISU students will be given priority, and there is no guarantee that time will allow for all submitted questions to be asked.

The Manatt-Phelps Lecture Series, established in 2002 by the late Ambassador Charles T. Manatt and Kathleen Manatt and Thomas and Elizabeth Phelps, brings to campus a prominent practitioner or scholar to address issues of significance to the United States and Iowa. It is now overseen by Michele Manatt, daughter of Charles and Kathleen.

Co-sponsors of this year’s lecture include the Department of Political Science, the Carrie Chapman Catt Center for Women and Politics, the African American Studies Program; College of Liberal Arts and Sciences; Department of History; Greenlee School of Journalism and Communication; Margaret Sloss Center for Women and Gender Equity; Office for Diversity, Equity, and Inclusion; Parks Library; University Committee for the Advancement of Women and Gender Equity; Women’s and Gender Studies Program; and Committee on Lectures, which is funded by Student Government.

Pulitzer-Prize winning journalist Nikole Hannah-Jones, creator of “The 1619 Project,” will appear at Iowa State University to present the 2022 Manatt-Phelps Lecture in Political Science. The Manatt-Phelps Lecture series, established in 2002, brings to campus a prominent practitioner or scholar to address issues of significance to the United States and Iowa.

A Conversation About the 1619 Project

Seating and bag policies for attendees