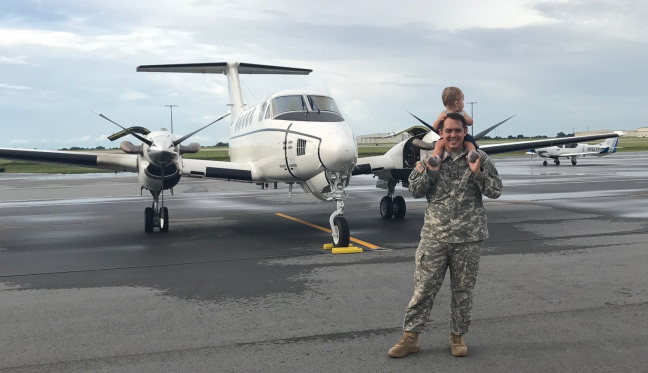 Bobby Gipe attained the rank of chief warrant officer 2 during his Army career, flying a C-12 Huron transport plane before his medical retirement from the military forced him to make an abrupt career change. Photo courtesy of Bobby Gipe. Larger image.

AMES, Iowa – Bobby Gipe had reached a crossroads and suddenly needed to make a decision that would change the trajectory of his life.

The U.S. Army aviator with a decade of experience had planned to become a commercial airline pilot after leaving the military, but a medication he’d been prescribed for a medical condition grounded him indefinitely. Suddenly, he was looking for a new career path outside of the military and aviation.

“I hadn’t really put much thought into what I would do if I couldn’t fly,” Gipe said during a recent interview. “I got caught in a position where I had to make an abrupt change of plans.”

Gipe landed at Iowa State University, where he’s enrolled in a double-degree program to earn a Master of Business Administration and a Master of Sciences in Information Systems from the Ivy College of Business in December 2023. He’s relied on the services and support of the Military-Affiliated Student Center to help him transition from the Army to life as a graduate student, and, on Veterans Day, he’s reflecting on how military service – both his own and that of others – allowed him the freedom to chart a new course when his original plan didn’t work out.

Gipe attained the rank of chief warrant officer 2 during his Army career, serving in Germany, South Korea and Afghanistan. He flew a C-12 Huron transport plane as a full-time member of the military and earned a bachelor’s degree as a part-time student. He planned to put in a full 20 years in the Army and then retire from the service to become an airline pilot. He expected to get a waiver that would allow him to keep flying when a medical condition required a change in prescriptions. He didn’t get the waiver as expected, necessitating a medical retirement from the Army and a major career change.

He enrolled at Iowa State since his wife is from nearby Gilbert, meaning he would have family in the area to help watch his three kids while his wife worked and he became a full-time graduate student. Still, the transition posed some serious challenges.

“Leaving the Army mid-pandemic in August of 2020, there were a lot of unknowns about entering graduate school and what classes would be like,” Gipe said. “In my full-time military life, I knew what I was supposed to do every day. And then the switch to full-time student came with a lot of adjustments.”

Rita Case, director of the ISU Military-Affiliated Student Center, said the center seeks to help students like Gipe successfully transition from the military to academia. The center offers military-affiliated students weekly dinners, tutoring and guidance on making sure they receive the full military benefits to which they’re entitled.

Gipe said those services helped him find a community at Iowa State with similar experiences and frames of reference. He made friends and felt more at home on campus. Before long, he’d taken an internship with Collins Aerospace and became president of the Student Veterans of America chapter at Iowa State. He plans to find a career in project management and business development in the aerospace industry after completing his degree.

Gipe said his travels as an Army pilot took him to Iwo Jima on a previous Veterans Day, where he learned about the sacrifice of U.S. servicemembers who fought on the island during World War II. He’s also spent Veterans Day in Germany, where he took in many other historic WWII sites. Those experiences reinforced his respect for the uniform.

“I served, but I didn’t have to make that ultimate sacrifice the way so many Americans did in World War II,” Gipe said. “Now that I’m a civilian and a student, I get to enjoy our freedoms here because of those who are still serving and keeping us safe."

Bobby Gipe, a former Army pilot, had to make an abrupt career change after his medical retirement from the military. Today, Gipe’s on track to earn graduate business degrees from Iowa State University, with the support of the university’s Military-Affiliated Student Center. On Veterans Day, Gipe reflects on the freedom he now cherishes as a civilian.

“I hadn’t really put much thought into what I would do if I couldn’t fly. I got caught in a position where I had to make an abrupt change of plans.”