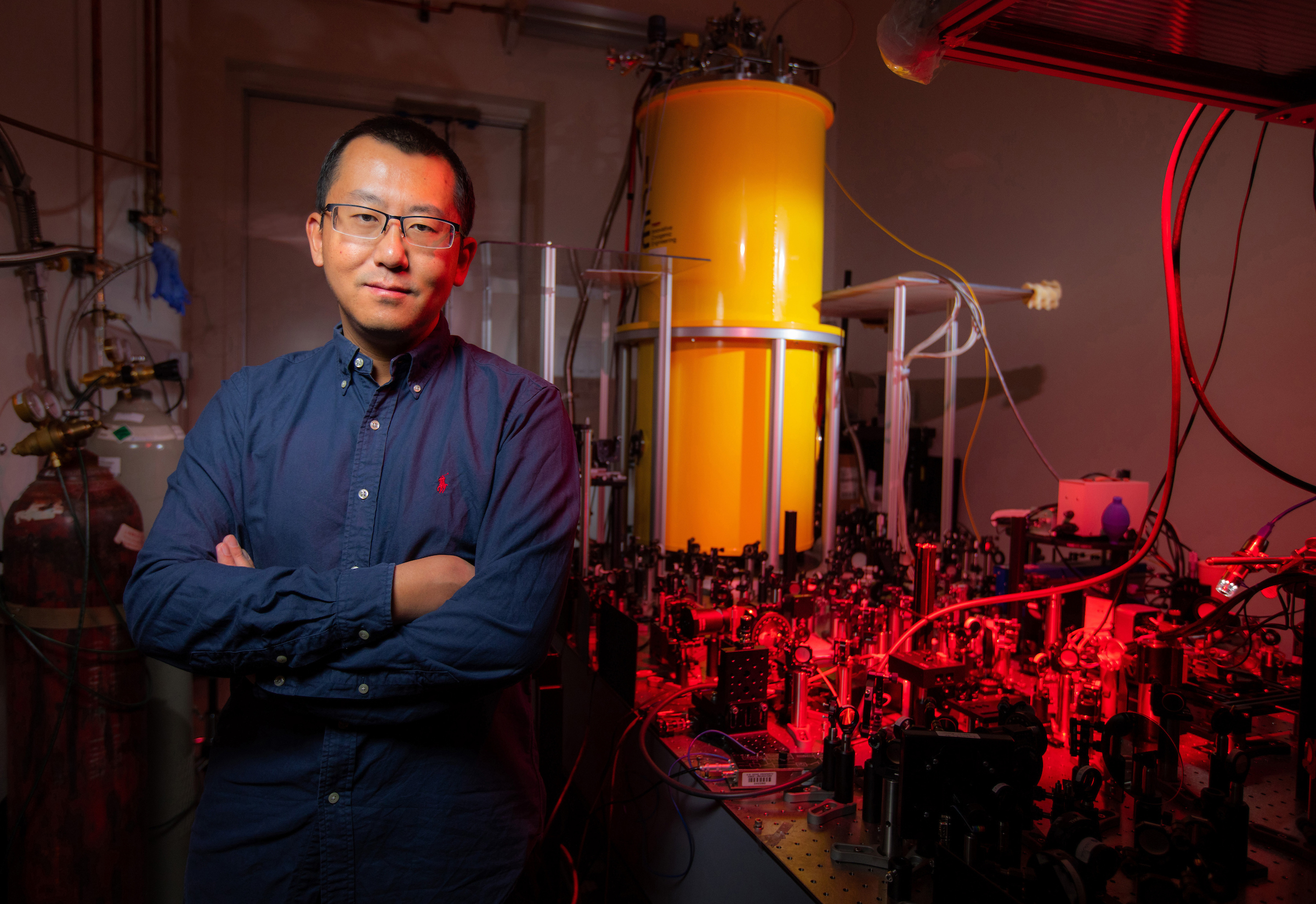 Jigang Wang with his Cryogenic Magneto-Terahertz Scanning Near-field Optical Microscope. (That’s cm-SNOM for short.) The instrument works at extreme scales of space, time and energy. Its performance is a step toward optimizing the superconducting quantum bits that will be at the heart of quantum computing. Larger photo. Photos by Christopher Gannon/Iowa State University.

AMES, Iowa – Jigang Wang offered a quick walk-around of a new sort of microscope that can help researchers understand, and ultimately develop, the inner workings of quantum computing.

Wang, an Iowa State University professor of physics and astronomy who’s also affiliated with the U.S. Department of Energy’s Ames National Laboratory, described how the instrument works in extreme scales of space, time and energy – billionths of a meter, quadrillionths of a second and trillions of electromagnetic waves per second.

Wang pointed out and explained the control systems, the laser source, the maze of mirrors that make an optical path for light pulsing at trillions of cycles per second, the superconducting magnet that surrounds the sample space, the custom-made atomic force microscope, the bright yellow cryostat that lowers sample temperatures down to the temperature of liquid helium, about -450 degrees Fahrenheit. 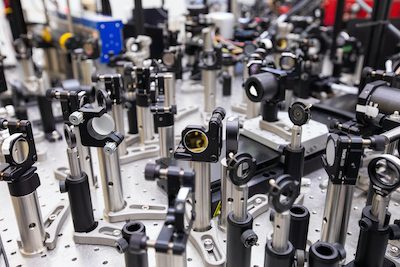 A maze of mirrors creates an optical pathway.

It took five years and $2 million -- $1.3 million from the W.M. Keck Foundation of Los Angeles (see below) and $700,000 from Iowa State and Ames National Laboratory – to build the instrument. It has been gathering data and contributing to experiments for less than a year.

“No one has it,” Wang said of the extreme-scale nanoscope. “It’s the first in the world.”

It can focus down to about 20 nanometers, or 20 billionths of a meter, while operating below liquid-helium temperatures and in strong, Tesla magnetic fields. That’s small enough to get a read on the superconducting properties of materials in these extreme environments.

Superconductors are materials that conduct electricity – electrons – without resistance or heat, generally at very cold temperatures. Superconducting materials have many uses, including medical applications such as MRI scans and as magnetic racetracks for the charged subatomic particles speeding around accelerators such as the Large Hadron Collider.

Now superconducting materials are being considered for quantum computing, the emerging generation of computing power that’s based on the mechanics and energies at the quantum world’s atomic and subatomic scales. Superconducting quantum bits, or qubits, are the heart of the new technology. One strategy to control supercurrent flows in qubits is to use strong light wave pulses.

“Superconducting technology is a major focus for quantum computing,” Wang said. “So, we need to understand and characterize superconductivity and how it’s controlled with light.”

And that’s what the cm-SNOM instrument is doing. As described in a research paper just published by the journal Nature Physics and a preprint paper posted to the arXiv website (see sidebars), Wang and a team of researchers are taking the first ensemble average measurements of supercurrent flow in iron-based superconductors at terahertz (trillions of waves per second) energy scales and the first cm-SNOM action to detect terahertz supercurrent tunneling in a high-temperature, copper-based, cuprate superconductor.

“This is a new way to measure the response of superconductivity under light wave pulses,” Wang said. “We’re using our tools to offer a new view of this quantum state at nanometer-length scales during terahertz cycles.”

Ilias Perakis, professor and chair of physics at the University of Alabama at Birmingham, a collaborator with this project who has developed the theoretical understanding of light-controlled superconductivity, said, “By analyzing the new experimental datasets, we can develop advanced tomography methods for observing quantum entangled states in superconductors controlled by light.”

The researchers’ paper reports “the interactions able to drive” these supercurrents “are still poorly understood, partially due to the lack of measurements.”

Now that those measurements are happening at the ensemble level, Wang is looking ahead to the next steps to measure supercurrent existence using the cm-SNOM at simultaneous nanometer and terahertz scales. With support from the Superconducting Quantum Materials and Systems Center led by the U.S. Department of Energy’s Fermi National Accelerator Laboratory in Illinois, his group is searching for ways to make the new instrument even more precise. Could measurements go to the precision of visualizing supercurrent tunneling at single Josephson junctions, the movement of electrons across a barrier separating two superconductors?

“We really need to measure down to that level to impact the optimization of qubits for quantum computers,” he said. “That’s a big goal. And this is now only a small step in that direction. It’s one step at a time.”

About the W. M. Keck Foundation

Jigang Wang's extreme-scale nanoscope is beginning to collect data about how pulses of light at trillions of cycles per second can control supercurrents in materials. The instrument could one day help optimize superconducting quantum bits, which are at the heart of quantum computing, a new and developing technology. 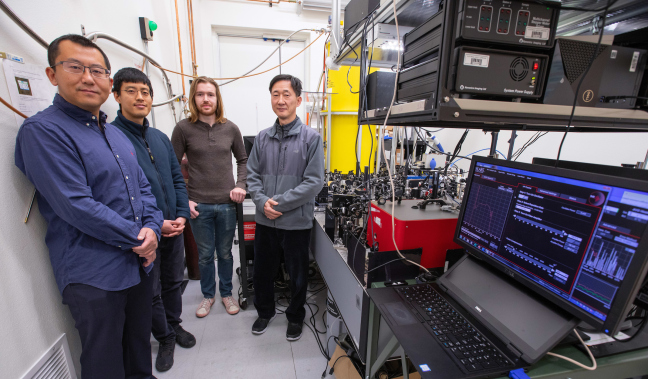