From National Guard deployments overseas to hurricane response and even from a hospital bed, Whitehead kept her gaze firmly on her goal of completing her degree. That perseverance will pay off this month at the conclusion of the fall semester when she’ll officially earn a master’s degree in family financial planning from Iowa State University, through the Great Plains Interactive Distance Education Alliance. Whitehead plans to use the degree to help others in the military improve their financial literacy.

“This program at ISU has changed my life completely,” Whitehead said. “I wanted to be a Cyclone. ISU has a nationally renowned reputation. This was a special program and the best choice I could have made for my education.”

Whitehead joined the National Guard just under a decade ago. She’s served as a military police officer and plans to put in a full 20 years in the military. Whitehead recently accepted a promotion and will switch to the Army Reserves in a few weeks to become a public information officer. She said the opportunity to devote her career to something bigger than herself appealed to her from an early age.

Along the way, she’s had to strike a balance between her academics and military service, pushing through some unusual challenges since enrolling in the ISU master’s program. When Hurricane Dorian slammed into the East Coast in 2019, Whitehead was called up to respond to the disaster. She was staying in an armory in South Carolina working on class assignments when floodwaters seeped into the building. Whitehead recalls having to put down her studies to fill extra sandbags to protect the armory.

During her most recent deployment, which took her to several countries in the Middle East over the course of about 10 months this year, she had to pause her studies to move her team to a safer location. Whitehead had to choose her words carefully while recounting the episode due to the sensitivity of the operation. She said she had to make fast decisions to get six soldiers in her charge prepared to leave a location in Syria when concerns arose that the location may not have been safe. It was already a stressful situation by any measure, but Whitehead said she had homework to finish as well.

“That was definitely a difficult couple of days because I was very concerned about that assignment because I don’t like to ask for accommodations,” she said. “But it got done and everyone was safe at the end of the day.”

Bringing grandmother’s lessons to others

Whitehead grew up near San Diego and earned an undergraduate degree in political science from the University of California at San Bernadino before joining the South Carolina National Guard. But the lessons she learned from her grandmother about the value of a dollar inspired her to consider continuing her education in financial literacy, she said. Her grandmother came of age during the Great Depression, and the economic calamity of the era taught her to squeeze the most value out of every penny.

“I like to be everyone’s depression-era grandma and talk about compound interest with anyone who will listen,” Whitehead said.

So she looked for ways to earn an advanced degree in financial planning while still serving in the National Guard. That’s when she came across the Great Plains Interactive Distance Education Alliance (GPIDEA), a national consortium of universities that offers flexible online programs for a virtual community of students from diverse backgrounds. Iowa State’s master’s program in family financial planning, offered through GPIDEA, sounded like the perfect fit.

“This program was amazing because of the flexibility,” she said. “Just trying to be a mom and wife and a military officer, I have to switch gears so often, and the program and all the faculty I worked with made it possible.”

She usually limited her class load to one course per semester and took one semester off along the way to balance her academics with her career and family life. She was able to fit her coursework into her schedule, no matter where in the world her military duties took her and no matter how many time zones separated her from her professors. She completed the degree without ever visiting the ISU campus.

Whitehead said she draws on what she learned from her coursework to help other members of the military make smart financial decisions. Military members receive a range of tax and retirement benefits when deployed, but those options can be difficult to navigate for those who lack financial experience, which applies to many young members of the military, Whitehead said.

“So many soldiers have asked me for financial advice and literacy-type questions,” she said. “Without the [degree] program, I wouldn’t have been able to communicate with them as well.”

Whitehead now lives in Memphis with her husband and 3-year-old daughter, who has been glued to Whitehead’s side since she returned from her deployment shortly before Thanksgiving. The homecoming brought back memories of the day her daughter was born, Whitehead said. The birth necessitated an emergency Caesarian section, and Whitehead remembers completing coursework from the hospital bed.

Today, Whitehead is taking time between duty assignments to enjoy the holidays with her loved ones and celebrate the completion of her degree. The respite has given her a chance to reflect on how she found the endurance to meet all the challenges of the past few years. She said it came down to getting the work done whenever an opportunity presented itself.

“I became a person who no longer procrastinated,” she said. “I started doing work early because I had to do it when I had time.”

Brittany Whitehead had to balance her military career and family while completing her master’s degree in family financial planning from Iowa State University through an online program. During the three-and-a-half years she spent studying for her degree, Whitehead worked on coursework during hurricanes, while on deployment in the Middle East and from a hospital bed. She plans to use her new degree to help servicemembers make smarter financial decisions.

“This program at ISU has changed my life completely. I wanted to be a Cyclone. ISU has a nationally renowned reputation. This was a special program and the best choice I could have made for my education.” 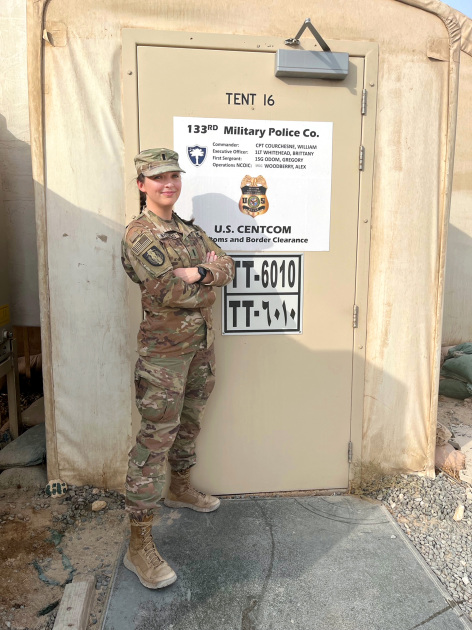 Brittany Whitehead during during a deployment in Kuwait. Whitehead spent most of this year in the Middle East on active duty with the South Carolina National Guard, but that didn’t stop her from completing a master’s degree from Iowa State through the Great Plains Interactive Distance Education Alliance. Photo courtesy of Brittany Whitehead. Larger image.

Nearly 2,100 students are completing degrees at Iowa State this semester. Their achievements will be celebrated during commencement ceremonies in Hilton Coliseum on Dec. 16 and Dec. 17. Full 2022 commencement details.

Disaster struck not once but twice during Yusuf Shehata's final semester at Iowa State University. While others suggested he delay graduation another term, he leaned into persistence, consistency and grit to carry him through. Read Yusuf's story.

Even as a little kid, Khushi Kapoor had a fascination with flying. That passion eventually led her to Iowa State's Aerospace Engineering program, where the senior pursued all sorts of opportunities to learn and experiment.