AMES, Iowa -- U.S. Sen. Chuck Hagel, R-Neb., will present the fourth annual Manatt-Phelps Lecture in Political Science at Iowa State University. He will speak on "A View from the Senate: Foreign Policy and Economic Issues" at 8 p.m. Sunday, Oct. 30, in the Sun Room, Memorial Union. The lecture is free and open to the public.

Hagel is Nebraska's senior U.S. senator. The North Platte, Neb., native was first elected to the Senate in 1996. He serves on the U.S. Senate Foreign Relations Committee and is chairperson of the Subcommittee on International Economic Policy, Export and Trade Promotion. He also serves on the Banking, Housing and Urban Affairs, Select Committee on Intelligence, and Rules and Administration committees.

Now living in Omaha, Hagel had no previous political experience before running for the Senate. Prior to his election, he was the president of an investment company. He earned a bachelor's degree from the University of Nebraska, Omaha, in 1971.

Thomas and Elizabeth Phelps, and Charles and Kathleen Manatt, established the annual Manatt-Phelps Lecture in Political Science. The annual fall lectures focus on significant developments in international political economy during the previous year, and how the issues affect and are affected by Iowa. 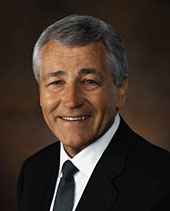 Phelps Lecture in Political Science, "A View from the Senate: Foreign Policy and Economic Issues," at 8 p.m. Sunday, Oct. 30, in the Sun Room, Memorial Union.