"Jamie Pollard has done an outstanding job at Wisconsin, and he is widely recognized for his management achievements and his creativity. We are extremely pleased that he has chosen to become a Cyclone and lead our athletics program," said President Geoffroy.

Pollard, 40, joined the athletic department at Wisconsin in May 1998 and has been deputy athletic director since 2003. In that role, he has been the No. 2 administrator in the Division of Intercollegiate Athletics, responsible for overall administration of the university's $72 million athletic department, which includes 23 sports.

Prior to being named deputy director, Pollard served as the athletic department's chief financial officer and senior associate athletic director. Since the 2001-02 academic year, he has served as sports administrator for the men's and women's basketball programs. In the past four seasons, the men's teams won two consecutive Big Ten Conference championships, one Big Ten Tournament championship and in 2005 advanced to the NCAA Tournament Elite Eight.

"I am honored to have been chosen as the next director of athletics at Iowa State University," Pollard said. "Iowa State's athletic program has a rich tradition, a solid foundation and tremendous potential for growth and even greater success. The opportunity to lead the athletic program at this time is very exciting."

In 2003, Pollard received Street & Smith's SportsBusiness Journal's "Top Forty Under 40" Award, which goes to the most influential and creative individuals in athletics under the age of 40. He was the first intercollegiate sports administrator honored by the magazine. In 2002, he was chosen as Business Manager of the Year by the Collegiate Athletic Business Managers Association.

Pollard received a B.S. degree in business administration in 1987 from the University of Wisconsin-Oshkosh. That same year, he was the NCAA Division III national champion in the 5,000-meter run. Twice, he was named Division III All-American.

Pollard and his wife, Ellen, have four children: Thomas, Annie, Maggie and James.

President Geoffroy said Pollard will receive a five-year contract, which provides an initial base salary of $275,000, plus annual incentives up to $75,000 for achieving athletic and academic performance goals. If he remains athletics director for five years, he will receive an additional $50,000 per year in deferred compensation.

The five-member committee that conducted the search for the new athletics director began its work Aug. 15 and was assisted by Baker-Parker, an executive search firm based in Atlanta, Ga. Ben Allen, vice president for academic affairs and provost, served as search committee chair. 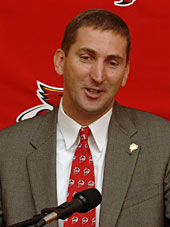 "This university has a rich tradition, a solid foundation, but even more important, tremendous potential."

Jamie Pollard, at the Sept. 29 press conference in which he was named ISU's next athletics director