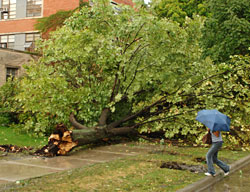 A large tree covers the sidewalk in front of Science Hall.

The midday storm, which occurred suddenly over the noon hour, sent one person to Mary Greeley Medical Center for treatment and observation. There were no reports of serious injuries; however, some streets and sidewalks are covered with debris from fallen tree branches. Several trees were blown over, uprooted or had broken branches. ISU's Facilities Planning and Management staff immediately began clearing the debris, and ISU Police responded to medical calls.

A light pole was blown over near the Gerdin Business Building on the east part of central campus. An ISU facilities truck was heavily damaged near Bessey Hall when a tree branch fell on it. Some tents and portable toilets near Jack Trice Stadium blew into vehicles. One large window at Stephens Auditorium was broken.

Story County Emergency Management confirmed that there were no tornado watches or warnings prior to the storm; however, at least three ISU employees reported seeing a funnel cloud.

The Ames Police Department reported no major damage elsewhere in the city.

All utilities at Iowa State remained operational throughout the storm.

Classes at Iowa State are being held as normally scheduled.