A couple at Iowa State turns that old maxim on its ear. For Abby and Brandon Simpson, the saying should be, "Horses brought us together." 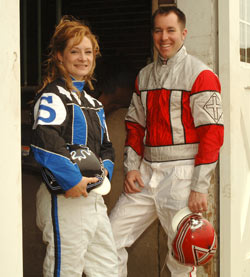 The Simpsons met through their love of horses and harness racing. In 2002, the woman from Maurice and the man from Fairfield, Ill., had come to Prairie Meadows race track in Des Moines to compete.

But when they first saw each other, it was, well, animal magnetism right out of the starting gate.

Brandon had the same thoughts. "First time I saw her, I almost knew right then. I got a weird feeling and was nervous," he said.

Soon after that first meeting the two decided to come to Iowa State (at the time, Abby was studying in South Dakota and Brandon in Illinois) to continue their studies, and hobbies, together. Abby will receive her degree in veterinary medicine in May while Brandon continues to make progress toward his marketing degree while working full time and racing when he can.

Harness racing is a form of horse racing in which the horse pulls the driver on a two-wheeled sulky.

For Brandon, racing has been a way of life. He is a third-generation driver. Harness racing permeates the family. Just last summer, Brandon, his grandfather, father, uncle and cousin all won races on the same day.

For Abby, horses also are a family tradition. Her father showed her how to ride at age 2, and by 10, she was "driving" horses on her own. She has been competing for five years now. She just finished a term as president of the Iowa State student chapter of the American Association of Equine Practitioners.

While the Simpsons, who were married in 2004, appear cozy and comfortable in their Ankeny townhome, it's different on the track where the two have raced against each other many times. Abby won at least the first six meetings before Brandon could beat her. The real number is a family secret.

But there are never any hard feelings after a race, no matter who wins.

"Out on the track," says Brandon, "it's all business."

They, like most their age, are deciding on their future. Abby wants to start her career. Brandon likes managing the Fireside Grill in Altoona. Abby likes to be near family. Brandon wants to race, and that means traveling.

No matter what they decide, you can bet horses will be in their future. After all, horses brought them together.

"Out on the track, it's all business."