AMES, Iowa -- Gwyn Beattie has been named to an endowed chair, the Robert Earle Buchanan Distinguished Professorship of Bacteriology for Research and Nomenclature, in the College of Agriculture at Iowa State University.

Beattie, an associate professor of plant pathology, specializes in genetics, physiology and the ecology of plant bacteria. Since joining the Iowa State faculty in 2002, she has worked with almost 700 students and provided research experiences for more than 25 undergraduates.

"Gwyn addresses questions that, if successfully answered, may help shift the paradigms we currently hold regarding the ecology and interactions of plant-associated bacteria," Baum said. "She's a scientist who is able to apply novel tools and approaches in her attempts to answer questions."

She also serves as a graduate advisor. Baum said her work has strengthened the graduate program in plant pathology as well as improved the visibility of microbiology at Iowa State.

Beattie received her bachelor's degree from Carleton College, Northfield, Minn., in 1985 and her Ph.D. from the University of Wisconsin-Madison in 1991.

Beattie studies leaf ecology as it relates to bacteria. She's working on a project evaluating whether leaf-associated bacteria can actively reduce airborne pollutants. She's also researching how plants can limit the availability of water to invading pathogens. And she is exploring whether the adaptations that plants use to tolerate drought and salinity influence the growth or survival of plant-associated bacteria.

The endowed chair position was established in 2003 with a gift from the Buchanan estate to honor Robert Earle Buchanan. Buchanan received his bachelor's degree in bacteriology in the department of microbiology in 1904 and master's degree in 1906 from Iowa State. He earned his Ph.D. from the University of Chicago in 1908. He went on to lead Iowa State in the area of bacteriological classification.

Buchanan was named an associate professor at Iowa State in 1908 and became the first head of the bacteriology department, serving from 1910 to 1948. He also served as the director of the Agricultural Experiment Station from 1933 to 1948. He was the first dean of the graduate division at Iowa State from 1919 to 1948. Buchanan Hall, a graduate student residence building, is named in his honor. He retired in 1948 and died in 1973. 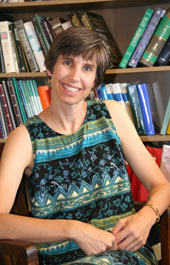 "She's a scientist who is able to apply novel tools and approaches in her attempts to answer questions."