AMES, Iowa -- You may never look at a cut of pork in the same way again. In fact, research by an Iowa State University food scientist could have you seeing red. 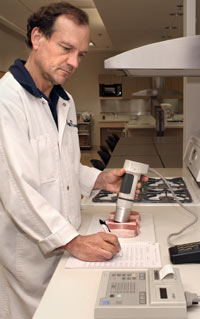 Iowa State University food scientist Ken Prusa has identified pH as a strong indicator of pork quality. Pork with a higher pH is darker and more tender, juicy and flavorful.

Ken Prusa, a professor of food science and human nutrition, has been researching ways to improve pork quality since he joined the Iowa State faculty in 1985. At that time, the push was to make pork extremely lean. By 1987, the pork industry had launched its marketing campaign, "The Other White Meat," which was based on public perception that chicken and turkey are more healthful than red meat, including pork.

Now, 20 years later, Prusa is part of a growing circle of scientists and leaders in the industry who think pork may be lean enough.

"So we're studying other attributes of the product to look for points of differentiation for value added," he said.

And Prusa may have identified a characteristic that could prove to be as significant to the industry as leanness.

"I was doing research in a meat packing plant and noticed that the Japanese export buyers always chose the darker pork," he said. "I wanted to find out why, so I evaluated some darker products."

Prusa's research showed the Japanese were selecting not by color, but by what color indicated: pH, a measure of acidity or alkalinity. Darker pork has a slightly higher pH than lighter pork. A higher pH means there's less acid -- acid that damages muscle proteins and causes meat to be pale and watery.

"Through sensory testing, we found pH to be a pretty strong driver of ultimate pork quality. Higher pH products are more tender, juicy and flavorful," he said. "It tuned us in to an opportunity to add value to pork products in the marketplace."

"Now producers and packers are hearing more about the pH factor and learning that it's in their best interest to produce products with higher pH," he said.

So how do they do that?

"Chilling is a big factor in processing," Prusa said. "It's critical to lower the temperature of the carcass fairly rapidly. Otherwise, the pH may drop too low before chilling can stabilize it. "

There's also a growing emphasis on reducing the stress an animal experiences just before slaughter. Keeping animals as calm as possible is key.

"Stress causes a high metabolism rate, which creates a lot of adrenaline. When that happens right before slaughter, it causes a really rapid pH decline. If there's a rapid pH decline in the hot carcass, it's even worse. At that point, there's not much you can do for quality," he said.

Prusa is working with packers, processors and geneticists to take advantage of the pH factor.

"There's probably a premium market in the U.S. for higher pH pork. Some major retailers on the West and East coasts are figuring out that the best pork is exported. We're looking at specific ways to provide them higher pH products," he said.

And, some processors and packers are moving toward buying pigs on the basis of pH. Packers are almost to the point of routinely measuring pH on the production line.

"When that happens, it will be like when they started measuring leanness. Pigs got lean. And when consumers started to pay for leanness, pigs got lean in a hurry," Prusa said.

"We hope that through our work with packers and processors, we'll see higher pH products on the market soon. We're looking at ways of marketing products on the basis of the deeper, richer color and flavor. People can see the difference. Once they taste it, the better quality is obvious," he said.

"If you tell the story correctly, back it up with scientific information, and have a better product," Prusa said. "Consumers will buy it."

"We hope that through our work with packers and processors, we'll see higher pH products on the market soon. We're looking at ways of marketing products on the basis of the deeper, richer color and flavor. People can see the difference. Once they taste it, the better quality is obvious."