Ray, who served as Iowa's chief executive from 1969 to 1983, also will deliver the commencement address at the ceremony.

An Iowa native, Ray earned degrees in business administration and law from Drake University and was an attorney in Des Moines for 14 years before beginning his political career.

After serving as governor, Ray became president and chief executive officer of Life Investors Inc. (now known as AEGON Inc.), president and CEO of Blue Cross and Blue Shield of Iowa, chairman of the board of trustees and president of Drake University. He also served a term as interim mayor of Des Moines.

Ray is actively involved in national health care issues and continues to serve as co-chair of the National Leadership Coalition on Health Care. 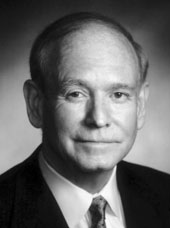