AMES, Iowa -- Research led by a pair of Iowa State University psychologists has proven for the first time that exposure to violent video games can desensitize individuals to real-life violence.

They authored a paper titled "The Effects of Video Game Violence on Physiological Desensitization to Real-Life Violence," which was published in the current issue of the Journal of Experimental Social Psychology. In this paper, the authors define desensitization to violence as "a reduction in emotion-related physiological reactivity to real violence."

Their paper reports that past research -- including their own studies -- documents that exposure to violent video games increases aggressive thoughts, angry feelings, physiological arousal and aggressive behaviors, and decreases helpful behaviors. Previous studies also found that more than 85 percent of video games contain some violence, and approximately half of video games include serious violent actions.

After playing a video game, a second set of five-minute heart rate and skin response measurements were taken. Participants were then asked to watch a 10-minute videotape of actual violent episodes taken from TV programs and commercially-released films in the following four contexts: courtroom outbursts, police confrontations, shootings and prison fights. Heart rate and skin response were monitored throughout the viewing.

"It appears that individuals who play violent video games habituate or 'get used to' all the violence and eventually become physiologically numb to it."

Participants in the violent versus non-violent games conditions did not differ in heart rate or skin response at the beginning of the study, or immediately after playing their assigned game. However, their physiological reactions to the scenes of real violence did differ significantly, a result of having just played a violent or a non-violent game. The researchers also controlled for trait aggression and preference for violent video games.

They conclude that the existing video game rating system, the content of much entertainment media, and the marketing of those media combine to produce "a powerful desensitization intervention on a global level."

"It (marketing of video game media) initially is packaged in ways that are not too threatening, with cute cartoon-like characters, a total absence of blood and gore, and other features that make the overall experience a pleasant one," said Anderson. "That arouses positive emotional reactions that are incongruent with normal negative reactions to violence. Older children consume increasingly threatening and realistic violence, but the increases are gradual and always in a way that is fun.

"In short, the modern entertainment media landscape could accurately be described as an effective systematic violence desensitization tool," he said. "Whether modern societies want this to continue is largely a public policy question, not an exclusively scientific one."

"Several features of violent video games suggest that they may have even more pronounced effects on users than violent TV programs and films," said Carnagey.

A copy of the paper is available at http://www.public.iastate.edu/~vasser/pubs/06CAB.pdf. 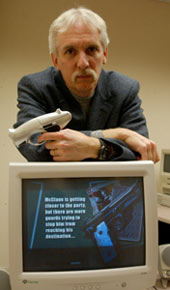 Research led by a pair of Iowa State University psychologists has proven for the first time that exposure to violent video games can desensitize individuals to real-life violence.

"The results demonstrate that playing violent video games, even for just 20 minutes, can cause people to become less physiologically aroused by real violence."