Townsend will discuss "Gender and Executive Leadership: Are We Ready for a Woman President?" at 8 p.m. Wednesday, March 29, in the Sun Room, Memorial Union. The event is free and open to the public.

"When political pundits talk about the first woman president or vice president, the name of Kathleen Kennedy Townsend is frequently mentioned," said Dianne Bystrom, director of the Carrie Chapman Catt Center for Women and Politics. "The oldest of the Kennedy family's younger generation, Townsend not only brings experiences from her family's rich historical and political legacy, but also insights on women's executive leadership and the importance of character education and community service for youth."

Townsend served as Maryland's lieutenant government from 1995 to 2003. In 2002, she narrowly missed a bid to become Maryland's first woman governor. As lieutenant governor, Townsend became nationally recognized as an advocate for victim's rights and an innovator in the fight against crime. She developed the first statewide initiative targeting crime hotspots and also is a strong advocate for quality education and health care.

Before becoming lieutenant governor, Townsend served as deputy assistant attorney general in the U.S. Department of Justice, during which time she worked to establish community-policing programs across the country.

Townsend is currently an adjunct professor at Georgetown University's School of Public Policy. She has taught foreign policy at the University of Pennsylvania, Philadelphia, and the University of Maryland, College Park. She has published articles in the New York Times, Washington Post and Washington Monthly. She also founded the Robert F. Kennedy Human Rights Award. She is the eldest child of Robert and Ethel Kennedy.

Her lecture is part of the Advancing Women's Leadership speaker series, sponsored by the Women's Leadership Consortium, Office of the Provost, Catt Center and University Committee on Women. The 2005-06 series consists of presentations by nationally prominent women leaders as well as the second annual Iowa Women's Leadership Summit on April 28.

Townsend is the 14th prominent woman leader to visit Iowa State as the Mary Louise Smith Chair in Women and Politics. The chair was created in 1995 to honor Smith, an Iowa native and longtime political and civic leader. It brings nationally renowned political leaders, scholars and activists to Iowa State. Smith was the only woman to chair the Republican National Party (1974-1977). 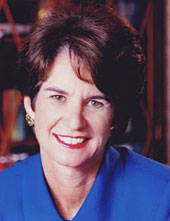 "When political pundits talk about the first woman president or vice president, the name of Kathleen Kennedy Townsend is frequently mentioned."