AMES, Iowa -- Jupiter was hovering low in the southwest sky. Charles Kerton caught it with his cursor, hit a button on the remote and the projector in Iowa State University's small planetarium zoomed in.

And there, at the top of the dome, was a good look at the solar system's most massive planet. Io, one of the planet's four big moons, was up there, too. With another click, Kerton, an assistant professor of physics and astronomy, zoomed in on that moon, a body known for its violent volcanic activity.

This fall the public is invited to the planetarium for a series of presentations followed by star-gazing sessions on the university's astronomy observation deck. Iowa State graduate students will plan and present the free shows.

The shows begin at 7 p.m. Oct. 20 and 21, Nov. 10 and 11, and Dec. 8 and 9. Each planetarium show will feature a presentation about what's in the night sky at that time of year and a second presentation to be determined by the graduate students.

The planetarium is located in Room B57 in the basement of Iowa State's Physics Hall. Enter through the doors off Osborn Drive and follow the signs. Doors for the planetarium presentations open at 6:45 p.m. Seating is limited to about 30 people. The star-gazing sessions will begin at about 8 p.m. at the observation deck on the fifth floor of the Zaffarano Physics Addition. 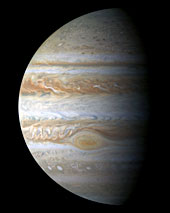 Iowa State graduate students will present planetarium shows at 7 p.m. Oct. 20 and 21, Nov. 10 and 11 and Dec. 8 and 9 in Room B57 of Physics Hall. The presentations will be followed by star-gazing sessions from Iowa State's astronomy observation deck. The presentations and sessions are free and open to the public.