Iowa State artist: When it comes to inventing furniture, I fold

Those are the thoughts that two years ago were going through the artistic mind of Iowa State integrated studio arts major Fumi Ikeshima as she was trying to think of a special project she could build.

Finally, it came to her. She'd make a chair.

A chair made of paper. Origami paper, folded and assembled in the traditional way that she had been learning since kindergarten in her native Japan. 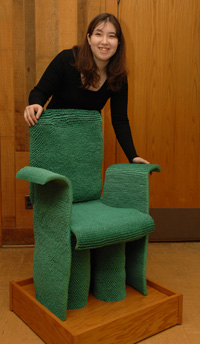 Now, after more than 450 hours of folding more than 35,000 individual pieces of paper by more than 90 people in two countries, Ikeshima can rest. The chair is done.

And, yes, she can take her rest sitting in the paper chair that she built.

Before designing and building this chair, Ikeshima had never seen one remotely like it. She is so convinced that it is an original, she is contacting the people at Guinness Book of World Records to see if it set a record of some kind. She is also contacting the paper company to see if they would like to feature her in their marketing efforts.

For the chair, much work lies ahead, and much is already done.

The junior from Chiba, Japan, is quick to point out that she didn't do it alone.

"My sister in Japan and her friends, folded about half of the paper," she said. "She took paper to school and started folding, and her friends just started helping. I also got help from friends and relatives in Michigan and Florida, and about 30 friends here in Ames."

Ikeshima said she held folding parties and cooked Japanese meals for her friends while they folded paper.

When the paper was folded into the traditional triangle shapes, it was then assembled by Ikeshima in her apartment. The triangles are held together by a small drop of glue on each piece. This tedious task took most of her vacation time.

"Spring break didn't exist for me," She said. "I was in my apartment working on this."

A paper chair is unusual, but Ikeshima likes using paper in all her artistic work. She often uses paper in her metal work projects, an art form that she hopes to pursue after college.

But for this semester it was paper, and lots of it.

"I just wanted to prove that paper can be strong and amazing and versatile," she said. "So I thought a chair would be the best bet because people can experience it and actually feel it for themselves."

The reaction Ikeshima got from her friends actually surprised her.

"When I started the project, my friends were telling me that it was a great idea and they encouraged me. But when I finished, they said 'I didn't think you could do it,'" she said.

And, in truth, Ikeshima wasn't certain herself.

She invited some of her friends to sit in the chair. Some hesitated. She said some wouldn't put their weight on the chair, and others would sort of hover above it not willing to test the chair's strength.

But now that her origami chair design has proven sit-worthy, she thinks another large-scale project may be in her future, but not for a while.

"I need a good idea first," she said. "But I do have enough paper left over for a foot stool."

Ikeshima was able complete the project due to a FOCUS grant she was given. These grants are made possible through the Government of the Student Body and are intended for a celebration of the arts and to encourage and reward student creativity in the arts.

The chair will be on display, along with other art works funded by FOCUS grants, in the Gallery of the Memorial Union through May 1. 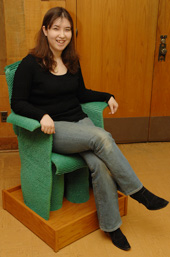 "When I started the project, my friends were telling me that it was a great idea and they encouraged me. But when I finished, they said 'I didn't think you could do it.'"