AMES, Iowa -- There's a "First Light Fiesta" in the works at Mt. Hopkins near Amado, Ariz. And Iowa State University astrophysicists will be among those enjoying the celebration of a new telescope system and all the science it will produce. 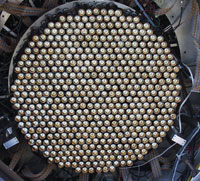 The $20 million VERITAS telescope system -- that's the Very Energetic Radiation Imaging Telescope Array System -- at the Fred Lawrence Whipple Observatory south of Tucson doesn't look like the telescope you used in high school. It's made of four reflectors 12 meters across that look like satellite dishes. The reflectors are covered with mirrors that direct light into cameras attached to the front of each dish. Each camera is about 7 feet across and contains 500 tube-shaped photon detectors or pixels. The telescope system is based on techniques Iowa State researchers Richard Lamb and David Carter-Lewis helped develop in the 1980s.

All those detectors for the VERITAS system were built in a laboratory on the fourth floor of Iowa State's Zaffarano Physics Addition. It took about $1 million and a lot of work by Iowa State post-doctoral researchers Tomoyuki Nagai and Martin Schroedter to do it.

Frank Krennrich, an Iowa State professor of physics and astronomy and leader of Iowa State's work on the VERITAS project, said the telescope system will be looking for gamma rays from space.

VERITAS is the northern hemisphere's most sensitive instrument for finding that high energy electromagnetic radiation. And gamma rays do have lots of energy: the energy of visible light is one electron volt; gamma rays have energies of one million to one trillion electron volts.

Even with all that energy, the rays can't penetrate the earth's atmosphere. But when they hit the atmosphere they create showers of electrons and positrons that create a blue light known as Cerenkov radiation. The showers move very fast. And they're not very bright.

So it takes a powerful instrument to find them. The astronomers say VERITAS is proving to be as sensitive as they expected.

"The quality of the data is so much better," Krennrich said. "The more telescopes you have, the higher the resolution for these measurements."

That's good news to Martin Pohl, an Iowa State assistant professor of physics and astronomy who's working to analyze and explain the data from the VERITAS observations, and Asif Imran, an Iowa State doctoral student whose dissertation includes the analysis of VERITAS data.

Researchers believe more knowledge of gamma rays could help them explore distant regions of space, help them look for evidence of dark matter, determine how much electromagnetic radiation the universe has produced, answer questions about the formation of stars and help explain the origins of the most energetic radiation in the universe.

Without the improvements in data now being produced by VERITAS, "You're like a fish on the beach," Pohl said.

And so these Iowa State astrophysicists have good reason to celebrate the telescope system's first light April 27-29 in the Arizona mountains.

"This is a pretty big deal," Krennrich said. "We have worked 10 years on this."

Iowa State researchers built the four cameras for the VERITAS telescope system in Arizona. The new $20 million telescope system detects gamma rays and will help astrophysicists explore distant regions of space, look for evidence of dark matter and help explain the origins of the most energetic radiation in the universe.

"The quality of the data is so much better. The more telescopes you have, the higher the resolution for these measurements."

Frank Krennrich, an Iowa State professor of physics and astronomy and leader of Iowa State's work on the VERITAS project