Editor's note: The College of Veterinary Medicine no longer performs this procedure.

AMES, Iowa -- If two dogs are any indication, Iowa State University veterinary researchers may have found a cure for a previously incurable disease that causes dogs to go blind suddenly. 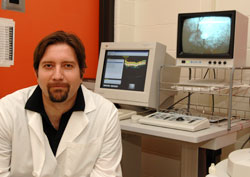 Dr. Sinisa Grozdanic with the optical coherence tomography scan that is needed to confirm the condition of a dog's retina before the dog can be considered for the experimental SARDS treatment. Iowa State is the only veterinary institution using this advanced diagnostic technology. Download print-quality version of this photo. Photo by Bob Elbert.

In the past six weeks, two dogs have been successfully treated for sudden acquired retinal degeneration syndrome (SARDS) by a research team led by ISU veterinary ophthalmologist Dr. Sinisa Grozdanic in the College of Veterinary Medicine.

The experimental treatment is the first to reverse blindness and restore sight to dogs diagnosed with SARDS. The treatment restored sight to the two dogs that were treated on April 12 and April 27.

"This is the first small sign of hope that actually something can be done," Grozdanic said.

The dogs were treated with intravenous immunoglobulin (IVIg), a human blood product that contains antibodies from the plasma of thousands of blood donors. It is used to treat immune deficiencies, inflammatory diseases and autoimmune diseases.

"Although the dogs won't be catching any Frisbees, they can navigate and not bump into objects," Grozdanic said.

SARDS was first identified in the 1980s and blinds as many as 4,000 dogs each year in North America, he said. The dogs have a sudden loss of vision despite no structural changes to the eyes or damage to the retinas in the early stages of the disease. Their eyes appear completely normal, but their retinas show no electrical activity.

Grozdanic and his colleagues wanted a better understanding of the molecular mechanisms that cause SARDS. They worked with the University of Iowa's Department of Ophthalmology and Vision Sciences to conduct genetic testing of SARDS tissue, cross referencing the results with the U of I's datebase of genetic information from different human ocular diseases.

"We saw that the molecular profile of SARDS eyes is very similar to immune mediated retinopathy in humans, which is usually antibody induced. That was the key factor," Grozdanic said.

Immune-mediated retinopathy in humans was not treatable until about 10 years ago when IVIg was found to show results in some patients.

Although the treatment has worked in two SARDS dogs, not every dog is a good candidate, Grozdanic cautions. Dogs with severe cardiac or kidney disease cannot tolerate IVIg. And it won't work in a dog whose retina degeneration is advanced.

"Once a dog gets SARDS, the retina degenerates quickly, so it's important the dog is treated with IVIg very soon after diagnosis," he said. "Usually dogs that have SARDS for longer than two months have severe retinal changes. The sooner it's treated, the better chance it will work."

An optical coherence tomography scan is needed to confirm the condition of a dog's retina. Iowa State University's Veterinary Medicine Hospital is the only veterinary institution using this advanced diagnostic technology, which is more commonly found in large ophthalmology centers for humans.

Diagnostic tests cost about $700. If the dog is a good candidate for treatment, hospitalization and intensive care fees will be about $1,200. The IVIg cost will be between $35-40 per pound of the dog's body weight.

"At this point, the biggest unknown is how long the treatment will last. It could be anywhere from a few weeks to a few years," Grozdanic said.

Grozdanic recommends owners visit the nearest veterinary ophthalmologist as soon as a dog exhibits any loss in vision.

ISU veterinary researchers may have found a cure for a previously incurable disease that causes dogs to go blind suddenly. Dr. Sinisa Grozdanic led a team that has successfully treated two dogs for sudden acquired retinal degeneration syndrome (SARDS). The treatment restored sight to the two dogs that were treated on April 12 and April 27. The dogs were treated with intravenous immunoglobulin (IVIg).

"This is the first small sign of hope that actually something can be done,"