AMES, Iowa -- You've got tens of millions of short DNA pieces from the corn genome to assemble. So what do you do?

Call Srinivas Aluru, Stanley Chair in Interdisciplinary Engineering and a professor of electrical and computer engineering at Iowa State University. 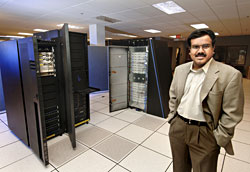 Aluru and his research team have come up with supercomputing solutions to assemble and analyze genomes. Their answer is a software technology called "PaCE" that runs on parallel computers -- including CyBlue, Iowa State's IBM Blue Gene/L supercomputer -- and generates draft genome assemblies in hours or days instead of months.

And that brings researchers that much closer to using their understanding of the corn genome to increase yields, improve nutrition and boost biofuels production.

The Computerworld Honors Program recognized Aluru's work to crack the corn genome by naming him a 2007 Laureate and Finalist during the 19th Annual Laureates Medal Ceremony and Gala Awards Evening in Washington, D.C., on June 4. The awards honor individuals and organizations that have used information technology to benefit society. During the evening ceremonies, the program honored 50 Laureates as Finalists and then 10 Finalists as winners of 21st Century Achievement Awards.

"Each Laureate selected for this honor understands the importance of using one's resources and technical prowess to benefit one's fellow man," said Bob Carrigan, the chairman of the Computerworld Honors Program Chairman's Committee and the president of IDG Communications.

"I'm very pleased to bring this honor to Iowa State University," said Aluru. "This is another example of the high quality interdisciplinary work we're addressing in the plant sciences and information technology. I'm pretty excited about this."

The corn genome work is a joint project of Aluru and Patrick Schnable, the director of Iowa State's Center for Plant Genomics and a professor of agronomy. Aluru, in fact, has invited Schnable to the laureate ceremony.

"We work as a good team and he deserves the recognition as much as I do," Aluru said.

Aluru said two of his doctoral students also made major contributions to the corn genome project. Scott Emrich, who is co-supervised by Schnable and is expected to graduate this summer, will begin work as an assistant professor at the University of Notre Dame this fall. And Ananth Kalyanaraman, who graduated last summer, is now an assistant professor at Washington State University.

Aluru said the students' success obtaining competitive faculty positions immediately upon graduation is another indication of the quality of the project's interdisciplinary work.

Schnable said Computerworld's award is great recognition for the kind of science that can happen at Iowa State.

"We've been able to do science that nobody else has been able to do," he said. "We're opening up the genome and putting together the jigsaw puzzle and now we're seeing results."

For more information about the Computerworld Honors Program, see www.cwhonors.org. 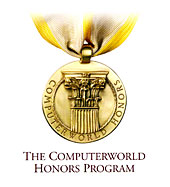 The Computerworld Honors Program is honoring Srinivas Aluru, Stanley Chair in Interdisciplinary Engineering and a professor of electrical and computer engineering at Iowa State University, as a Laureate for developing software technology that's helping researchers assemble and analyze the corn genome.

"I'm very pleased to bring this honor to Iowa State University. This is another example of the high quality interdisciplinary work we're addressing in the plant sciences and information technology. I'm pretty excited about this."