ISU's Coats selected as fellow of the Entomological Society of America

AMES, Iowa -- When Joel Coats is named a fellow of the Entomological Society of America at its annual meeting this December, he won't be alone.

Several of his former students will be there to help him enjoy the honor. It is Coats' connection to those students that still lights up his face after almost 30 years at Iowa State University.

"I really enjoy working with the students and training them," said Coats, a professor in the department of entomology. "And then they can go on to great things, and they'll feel good about their experiences where they've gone."

Coats has always focused his classrooms and laboratories on developing the students professionally as well as instructing them in entomology and toxicology.

"I teach confidence," he says.

Coats makes sure that all his students have opportunities to present their own work at symposia, meet people in the industry, and travel to scientific conferences when possible.

"And when they graduate, they end up with the knowledge that they can do the job, and they are as good as the other students. They get the confidence that they really know their stuff," he said.

Coats figures those students may be the chief reason for this honor by the entomological society. Worldwide, there are 36 former graduate students of his who are working in the field of entomology and agrochemicals.

"It is really because of the students that I get noticed," he said.

It's not the first time Coats has received this type of acclaim.

Last year he was recognized by the American Chemical Society, receiving the International Award for Research in Agrochemicals.

"I'm about half entomologist and half chemist," he said. "So the chemists recognized me last year and the entomologists this year; that's nice." 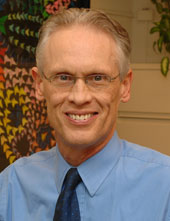 "It is really because of the students that I get noticed."