AMES, Iowa -- Tiny meteors flash through space. There's spacecraft debris flying around, too. And so there's a risk that objects just a few millimeters across could pierce the thin aluminum skin of spacecraft such as the International Space Station orbiting 220 miles above Earth.

A tiny hole means a tiny leak of pressurized air.

"NASA wants to be able to find these leaks," said Dale Chimenti, an Iowa State University professor of aerospace engineering. "Fixing them is easy. But the question is, 'Where is the leak?"'

But astronauts had better find that leak as quickly as they can, Chimenti said. A spacecraft can only produce so much oxygen. NASA can't afford for it to slowly and steadily blow into the cold vacuum of space.

And so the National Aeronautics and Space Administration asked an Iowa State research team led by Chimenti to develop a sensor that can find leaks by detecting the small vibrations in a spacecraft's skin caused by escaping air. NASA has so far supported the work with $600,000. The Iowa State engineers are working with Invocon Inc. of Conroe, Texas, to use their sensor with the company's wireless electronics.

The different elements pick up the vibrations at different times. Those differences can be analyzed by a computer to determine the direction of the leak. Add information from multiple sensors and a leak can be found in about a minute. It can take weeks to find a leak with NASA's current handheld, ultrasonic detection devices.

But it wasn't easy to improve the technology. Chimenti said a major challenge was accounting for a reinforcing grid that rises from the back of a spacecraft's shell and affects the travel of vibrations. He said the researchers solved the puzzle by targeting the frequency range measured by the sensors. They focus on lower frequencies and that reduces the effects of the reinforcing grid.

The sensor is now with researchers at Invocon, a company that built three kinds of electronic sensors for the June 8 space shuttle mission that carried Iowa State graduate Clayton Anderson to the International Space Station. One of the sensors was designed to record any impacts to the leading edge of the space shuttle's wing during liftoff.

Kevin Champaigne, a program director for Invocon, said company researchers led by Jonathan Sumners, a senior design engineer, are working to connect the Iowa State sensor with new Invocon electronics. That work will be completed over the next few months.

Chimenti and the company will submit a joint proposal for Phase II funding from NASA's Small Business Technology Transfer Program. If NASA funds that proposal, Iowa State and Invocon researchers would develop a prototype of the leak detection system for NASA.

"This project has gone very well," Chimenti said. "We've created a low-cost sensor. But the whole thing works. This is a very robust system." 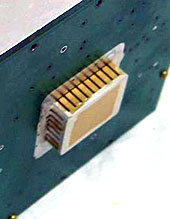 This sensor developed by Iowa State University researchers can detect leaks on spacecraft.

A research team led by Dale Chimenti, an Iowa State University professor of aerospace engineering, has developed a low-cost sensor that can help astronauts detect leaks on spacecraft such as the International Space Station.

"NASA wants to be able to find these leaks. Fixing them is easy. But the question is, 'Where is the leak?'"