AMES, Iowa -- U.S. Sen. Hillary Rodham Clinton (D-NY) will visit Iowa State University on Wednesday, Oct. 24, as the Fall 2007 Mary Louise Smith Chair in Women and Politics. The former First Lady is among the candidates seeking the Democratic Party's nomination for president in 2008.

Clinton will deliver a presentation focusing on women in public leadership at 5:30 p.m. on Oct. 24 in Stephens Auditorium, Iowa State Center. The event is free and open to the public.

"The Catt Center is pleased to have hosted every woman who has sought the Republican or Democratic Party nomination for president since 1995, when the Mary Louise Smith Chair was established," said Dianne Bystrom, director of ISU's Carrie Chapman Catt Center for Women and Politics. The previous women presidential candidates hosted by the Catt Center are U.S. Sen. Elizabeth Dole (R-NC), the 1999 Mary Louise Smith Chair who sought the Republican nomination that year; and former U.S. Sen. Carol Moseley Braun (D-IL), who visited Iowa State in spring 2004 while seeking the Democratic nomination for president.

Clinton was elected to the U.S. Senate in November 2000 -- becoming the only First Lady elected to public office and the first woman elected independently statewide in New York. She was re-elected in 2006.

In the Senate, Clinton serves on the Health, Education, Labor, and Pensions Committee; the Environment and Public Works Committee; the Special Committee on Aging; and is the first New Yorker ever to serve on the Senate Armed Services Committee. She was asked by the Department of Defense in 2004 to serve as the only Senate member of the Transformation Advisory Group to the Joint Forces Command.

Clinton is the author of best-selling books including her autobiography, "Living History," "It Takes A Village: and Other Lessons Children Teach Us," "Dear Socks, Dear Buddy: Kids' Letters to the First Pets," and "An Invitation to the White House."

A graduate of Wellesley College and Yale Law School, she is married to former President Bill Clinton.

Clinton will be the 16th prominent woman leader to visit Iowa State as the Mary Louise Smith Chair in Women and Politics. A complete list of past speakers is available at http://www.las.iastate.edu/CattCenter/smithchairs.shtml.The chair was created in 1995 to honor Smith, an Iowa native and longtime political and civic leader. It brings nationally renowned political leaders, scholars and activists to Iowa State. Smith was the only woman to chair the Republican National Party (1974-1977). 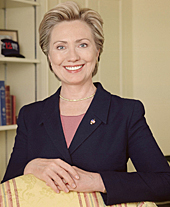 U.S. Sen. Hillary Rodham Clinton (D-NY) will be Iowa State's Fall 2007 Mary Louise Smith Chair in Women and Politics. The former First Lady and presidential candidate will present a free, public talk focusing on women and leadership on Wednesday, Oct. 24, at 5:30 p.m., in Stephens Auditorium, Iowa State Center. The event is free and open to the public.